Stakes High As Kenya Goes To The Poll Tuesday 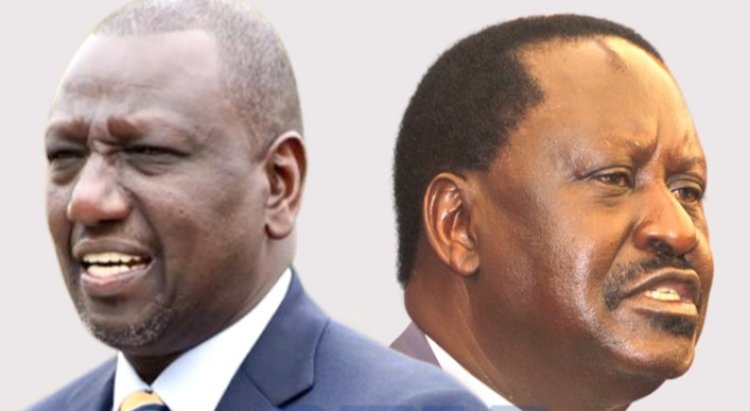 Kenya is heading to the polls to elect a new president on Tuesday, August 9, 2022.

Four candidates are angling for the exalted seat but the election is a two-horse race, between the incumbent Deputy President William Ruto, and veteran opposition leader, Raila Odinga.

Ruto is contesting under the platform of the United Democratic Party while Odinga is running under Orange Democratic Movement.

The election is being watched closely, given Ruto’s popularity and his influence in government, while Odinga is a household name in Kenyan politics.

But it is more since for the first time in the history of Kenya, the president and his deputy had openly parted ways and the rift between them is causing tensions in various parts of the country, notably at political rallies convened by the deputy president’s allies.

Outgoing President Uhuru Kenyatta has pitched his tent with his former rival Odinga, against his deputy.

Odinga,77, a former prime minister, had contested and lost four presidential elections in the past. But, he said, this would be his last attempt.

Other candidates are professor George Wajackoyah of Roots Party and David Mwaure Waihiga of Agano Party, who are both considered long shots and unlikely to win the presidency.

Tuesday’s election is faced with myriad of challenges and political dynamics, which are likely to affect the smooth conduct of the polls.

Prominent among them are hate speeches, fear of violence and manipulation of ethnic grievances.

Kenyan politicians, like that of Nigeria, often exploit historical grudges and cultural differences to incite violence in order to win elections. This has therefore been turning politics into a zero-sum game, at the expense of addressing pressing issues that could better people’s lives in their respective countries.

Some political analysts believe that in this long-awaited poll, ethnicization of politics may not play out. But it will be too soon for the electorate to forget so easily how competition among the more than 40 ethnics groups used to dominate elections in the past, especially the two major tribes.

John Githongo, who fled Kenya in 2005 because he was considered a traitor by some members of his Kikuyu community after he exposed a massive corruption scandal in the administration of the then-President Mwai Kibaki, a fellow Kikuyu, recently told BBC that “ethnic mobilisation was less overt in the forthcoming election campaign.”

He said Ruto lumps his main challenger, Raila Odinga, a veteran opposition politician and the son of Kenya’s first vice-president, in the former category, along with President Uhuru Kenyatta, the son of the first president, while he portrays himself as the champion of “hustlers” – a reference to poor Kenyans.

Mr Odinga has criticised the framing as an attempt to divide Kenyans along class lines, and has focussed his campaign on a message of unity.

But in a significant change from previous campaigns, the two front-runners have mostly traded barbs over their economic and social policies.

This is the message that many political observers in Nigeria are currently preaching, especially now that the politicians are using religion and ethnicization to woo political support.

Analysts also observed that a shift in Kenya’s political campaigns from inter-ethnic to inter-class competition is equally dangerous for the election and the polity.

According to them, this new political dynamic -if not well handled – could be a path to the country’s revolution, especially now that the election comes in the midst of a cost-of-living crisis, worsened by high unemployment and a huge national debt.

Any attempt to dwell on such campaigns at the moment could lead to class crises not only in Kenya or Nigeria but vulnerable nations around the world.

A practicable example is when a deputy governor in Kenya had his car torched by bodaboda riders (motorcycle taxi) following an accident that involved his vehicle and a motorcycle.

“This rhetoric threatens to rekindle historic urban violence between tenants and landlords, which has had far-reaching consequences” said an analyst, Lawan Cheri.

Opinion poll: Odinga on the lead

In the survey, released on Tuesday by the Ipsos group, 47 per cent of respondents said they would vote for the former prime minister in next week’s presidential election.

Kenya’s deputy president, William Ruto, was second at 41 per cent, with George Wajackoya and David Mwaure a distant third and fourth respectively.

Nine per cent of voters were undecided.

Under Kenya’s electoral system, a candidate needs to win 50 per cent of the vote plus one to be declared the winner and avoid a runoff.

“Should Raila convert half of the undecided voters, he will win this election first round. If Dr William Ruto converts 100 per cent of the undeclared vote, he will force a re-run,” said Samuel Muthoka, the East and Horn of Africa director at Ipsos.

Another recent survey by Trends and Insights for Africa (TIFA) found that Odinga was the most preferred candidate at 46.7 per cent, while Ruto polled at 44.4 per cent.

The Ipsos survey, taken between July 23 and 30, shows Odinga’s sweet spot is his legacy as a democratic and experienced leader, while those who support Ruto believe he presents hope with a clearer plan for the country’s future.

Odinga’s age and Ruto’s integrity issues are their major drawbacks according to the polls. Odinga is 77 years old while Ruto is accused of multiple corruption issues.

Muthoka says the election comes down to a few geographic areas, including major population centres in Mombasa, Nakuru Kiambu and Bungoma counties.

This time around also, Odinga has picked Martha Karua, Kibaki’s justice minister, as his running mate to bring in mass votes among women and Kikuyu people, the country’s largest ethnic group.

Kenyan media are calling it the “Karua wave”, as the woman hoping to be the country’s first female deputy president energises a jaded political race.

“There was a very ambivalent middle class looking at all the candidates, feeling like there was no one they could identify with. That base was definitely stirred up when Martha joined the race,” says Joy Masinde, a political analyst. “It energised a group of urban women that were not very interested in the political process.”

The campaign is also characterized by inflammatory speeches by leading politicians from all sides.

Kenyan court has charged MP Oscar Sudi with two counts of hate speech and one of offensive conduct for remarks that the National Cohesion and Integration Commission (NCIC) stated could have led to a breach of the peace.

Sudi’s comments echoed those made by his colleague, MP Johanna Ng’eno, who also faced hate speech and incitement charges.

However, in apparent response to these incidents, the NCIC proposed a new law ahead of the 2022 general election that seeks to outlaw discrimination and incitement of Kenyans along ethnic, religious or racial lines.

All said, observers believe the outcome of the election will be too close as both sides hold on tight to their areas of strength.