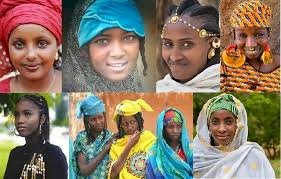 “I will put My law in their inward parts, and write it in their hearts; and I will be their God, and they shall be My people.”1

In looking at the identity construct of the Turudbe’ Fulbe’ it is important to inquire into their origin and to trace the geneses of their intellectual traditions and traditions of histiography. The origin of the Turudbe’ Fulani has been cast in a veil of mystery, mainly because of the diverse opinions among the ancient and contemporary scholars concerning them.

Furthermore, the various nomenclatures given to these people do nothing to eradicate this enigma. They refer to themselves in the singular as pullo and as fulbe’ as a group.2

For example: Takruur, Tukulor, Toronkawa, and Turudbe (sing. Turuudi), are all names referring to one people. The Arab historians referred to these people as Takruri.3

Today this cognomen is used to refer to every Black from West Africa. In Franco-phone Africa, the Fulani are called by the Wolof term Tukulor, which was the Wolof referent to the people of Takruur.4

Further east among the Hausa speaking nations the Fulani are called Toronkawa. However, they refer to themselves as Turudbe’ in their language of Fulfulde’ or as Turudiyya in Arabic.5

The last two cognomens are how they are known among other Fulani ethnicities, as well. In the region of Futa Toro, the Fulani refer to themselves as Haalpulaar`en (those who speak Pulaar or Fulfulde’ language).6  It is from this name that the French refer to them as Peul.

The Fulbe’ in general and the Turudbe’ in particular are dispersed throughout the Sahel region of Africa, from Cape Verde in the west to Ethiopia in the east, and from the equatorial regions of Illorin in the south to edge of the Sahara desert in the north.7

Suret-Canale rightly points out that the reason for the dispersion of the Fulbe’ across vast areas of Africa is the fact that they specialize in the herding of cattle and the Sahel is best suited for this specialization.8

However, the Turudbe’ were distinguished from the other Fulani ethnicities due to the fact that they played a key role as leaders of religion and the purveyors of intellectual and religious reform throughout the Western, Central and Eastern Sudan.

Our study will show that their reform even survived the ‘Middle Passage’ and played a significant part in the identity construct and struggle for freedom for many Africans in the Diaspora of the Americas.

The comprehension of this function performed by the Turudbe’ Fulani, as Lost & Found children of Abraham;  “is a sine qua non to an understanding and appreciation of the movements and events in the Western Sudan, particularly in the nineteenth century.”9

Umar al-Naqar points out that the origin of the Turudbe’ Fulani comes from the region of Futa Toro. Here he uses the evidence established by the Arab historian al-Bakri, which is the earliest Arabic reference to the Turudbe’.10

The name Takruur is the name given to the capital of the ancient African-Islamic state that later came into alliance with the Almoravid movement (al-Murabitun – ‘the People of the Military Garrisons) led by Abdallah ibn Yassin in the tenth century. Al-Bakri gives and interesting account of these people when he said:

“The people of Takruur are black and were previously idolaters like the remainder of the Sudanese. They worshipped dakaakir – the name of the gods in their language. This was until the rule of War Jabi ibn Abi Rabis. He accepted Islam, introduced the Shari`a, ordered them to follow its judgments and opened their eyes to the Truth”11

This indicates that the Turudbe’ Fulani were Muslims prior to their contact with the Almoravid movement and had attained a high level of Islamization.

According to Nehemia Levtzion, it was the Turudbe’s fervent adherence to Islam that caused Abdallah ibn Yassin, the founder of the Almoravid movement (al-Murabituun), to immigrate to the lands of Takruur. This event made the Turudbe’ allies of the Almoravid in their wars against the kingdom of Ghana.12

This alliance can be seen in the presence of more than 4,000 white turbaned Sudanese troops who accompanied Yusef ibn Tashfin in the Almoravid conquest of Spain in 1087 C.E. 13

Oloruntimehin gives another view of the people of Takruur which defines the Turudbe’ as a sub-clan of the Tukulor inhabitants of Takruur. He points out that the Tukulor had an extensive caste system divided into three major groups. The more dominant of the groups were the rimbe’ (free men) and that the Turudbe’ were the elite of this group.

This high social status among the Tukulor was due to their “religious aristocracy who led Futa Toro in its religious wars and conquests which had so much impact upon its history.”14 This is in contrast to the opinion that the Turudbe’ were a clan in and of themselves as Willis recognized.

John Willis of Princeton, gives a more humble picture of the Turudbe’ when he said: “The Torodbe clerisy evolved out of that rootless peoples who perceived in Islam a source of cultural identity.”15

He affirms the view of Oloruntimehin, that the Turudbe’ became a ruling elite in Futa Toro, but he adds that they did not have a precise ethnic origin.

According to him, their society was open to all individuals prepared to adopt their Islamic customs and beliefs. He and other scholars maintained that the Turudbe’ roots did not spring from blood, but from “the craft of Islam and indeed attracted their livelihood from this pursuit.”16

According to Moustapha Kane and David Robinson the cognomen Turudbe’ is often attributed to the region of Toro by those living outside of Futa, but the name is actually derived from the Fulfulde’ verb tuurrade, which means, “to beg for alms”.17

The begging for alms was and still is a practice for the students of the Quranic schools throughout the Bilad‘s-Sudan. This practice has been a custom designed to instill humility in students and disciples of the Spiritual Way (at-tareeqa).

However, this concept of ‘begging’ flies in the face of what Leger and Mohammad described as the key component of being Fulbe`, the concept of ‘semteende` (‘shamefulness’), that is to say, not bringing shame on oneself by begging or depending on others. 18

Kane and Robinson assert that the Turudbe’, in particular were an oppressed group under the above mentioned Dhiankhanke’ rulers of Takruur.20 Because their members were recruited from the submerged levels of society, the Turudbe’ have been depicted as having very humble and modest origins.

These are academicians view of the Turudbe` Fulani which demonstrate inconsistencies and a certain level of confusion.

The fact that the Fulani, unlike most African ethnicities, are spread across vast regions of the African continent and were assimilated linguistically into the linguistics groups in which they lived, does nothing to clarify their identities. It is thus important to examine what the Fulani, and particularly, the Turudbe` say about themselves; which will be the subject of part 2.

2. Jean Suret-Canale, “The Social and Historical Significance of the Peul Hegemonies in the Seventeenth, Eighteenth and Nineteenth Centuries: Essays on African History, The Slave Trade to Neocolonialism, (C. Hurst & Co., London), p. 31.

Nigeria: No Proof for ’12 Million Jobs’ in Nigeria’s Rice Industry, As Presidential...

Fulani:5 things you should know about Fulani tribe