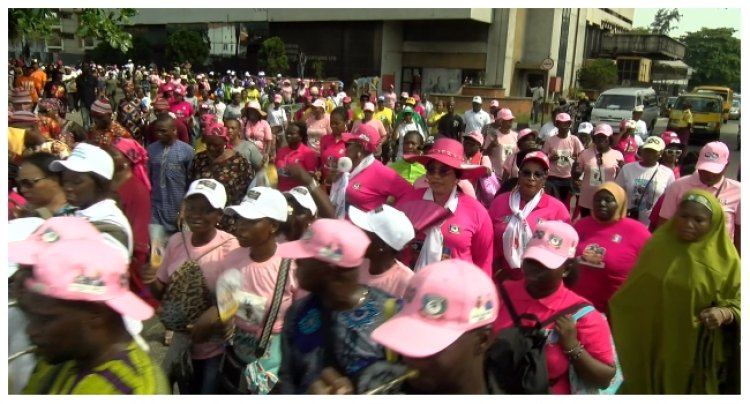 Members of the women’s wing of the All Progressives Congress held a march in parts of Lagos State on Monday to rally support for the party’s presidential candidate, Bola Tinubu, and his running mate, Kashim Shettima, ahead of the February polls.

The rally was attended by some APC bigwigs including Lagos State Governor, Babajide Sanwo-Olu and his wife, Ibijoke; as well as the Deputy Governor, Obafemi Hamzat, and his wife, Oluremi.

The Tinubu-Shettima supporters marched from Lagos Island to the Mobolaji Johnson Arena, formerly Onikan Stadium, and chanted solidarity songs as they waved different sizes of APC flags and brooms, an insignia of the ruling party.

Participants at the rally were spotted wearing different colours of branded T-shirts and fez caps with inscriptions to rally support for Tinubu and Shettima. They also drummed support for the second term bid of Sanwo-Olu and Hamzat.

Tinubu, a former Lagos governor from 1999 to 2007, is jostling for Aso Rock’s top job in 2023 alongside major contenders including Atiku Abubakar of the Peoples Democratic Party and Peter Obi of the Labour Party in an election which has been described as analysts as three-horse race

We Cannot Leave A Man With 11 Million Votes And Support...