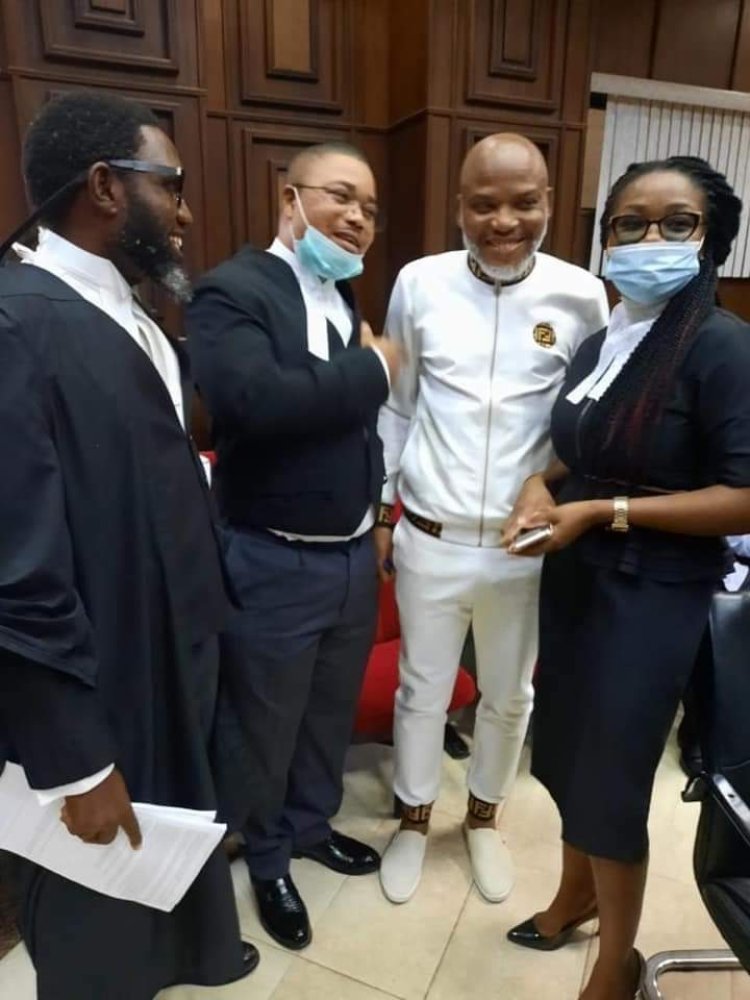 Mazi Nnamdi Kanu, leader of the Indigenous People of Biafra (IPOB), has pleaded not guilty to the seven count charge slammed on him by the Federal Government.

He made the plea as his trial for treasonable felony began at the Federal High Court Abuja Thursday in Abuja.

The DSS brought Kanu into the courtroom on the fifth floor of the high-rise building about 9:45am in company of heavily armed security agents.

Latest report from the courtroom said the case has been adjourned till 10 November.

Kanu beamed with smiles as he took photos with his team of lawyers before the court session started at 10 am.

When the seven count charge was read to him, at about 10.45 a.m, the IPOB leader pleaded not guilty.

Count one of the charge reads that Kanu “being the leader of the Indigenous People of Biafra (IPOB), on diverse dates in 2014 and 2015 in London, United Kingdom, did broadcast on Radio Biafra monitored in Enugu and other areas within the jurisdiction of this honourable court, preparations made by you and others now at large, for states in the South-East and South-South zones and other communities in Kogi and Benue states to secede from the federal republic of Nigeria with a view to constituting same into the Republic of Biafra and you thereby committed an offence punishable under Section 41(c) of the Criminal Code Act, CAP. C77, Laws of the Federation of Nigeria, 2004”.

Count six of the amended charge reads: ”That on the 16th of May , 2021 in London, United Kingdom within the jurisdiction of this Honourable Court did commit and act in furtherance if an act of terrorism by making a broadcast that “in two weeks time, what will happen will shake the world, people will die, the whole world will stand still mark my word” and you thereby committed an offence contrary to and punishable under Section 1 (2) (h) of the Terrorism Prevention Amendment Act, 2013.”

The court refused the application by his lawyer for transfer of Kanu to Kuje Correctional Centre.

However, Justice Binta Nyako, allowed three persons of his choice to visit him at the DSS facility.

The judge then adjourned the case till November 10 to hear his application, challenging the competence of the charge.

The Nigerian government claimed he jumped bail in 2017 and fled to the UK.

Kanu said he left Nigeria because his life was in danger.

He left Nigeria after soldiers raided his father’s residence in Abia state in November 2017, killing some people.

IPOB was subsequently declared a terrorist group by the government and after the south-east governors proscribed it.

On June 28, Justice Binta Nyako gave the order that Kanu be remanded in DSS custody, while fixing trial for 26 July.

But on the adjourned date, the DSS failed to produce him, leading to the long adjournment.

Ifeanyi Ejiofor, Kanu lawyer told journalists in Abuja that the matter was adjourned to allow lawyers to the secessionist leader to challenge the competence of the new charges brought against him by the Federal government.

But Ejiofor who refused to speak on the new charges described them as incompetent.

He said the case was adjourned till 10 November to enable Kanu’s lawyers argued on the competence of the charges.

He added that the court also said Kanu, who was brought to court should continue to be detained at DSS custody for his safety and security.

Tags:   Nnamdi Kanu
Introduced in August 1994 to satisfy a yearning for a fresh, breezy and entertaining afternoon paper in Lagos and its environs, P.M.News is positioned as a paper for everyone.