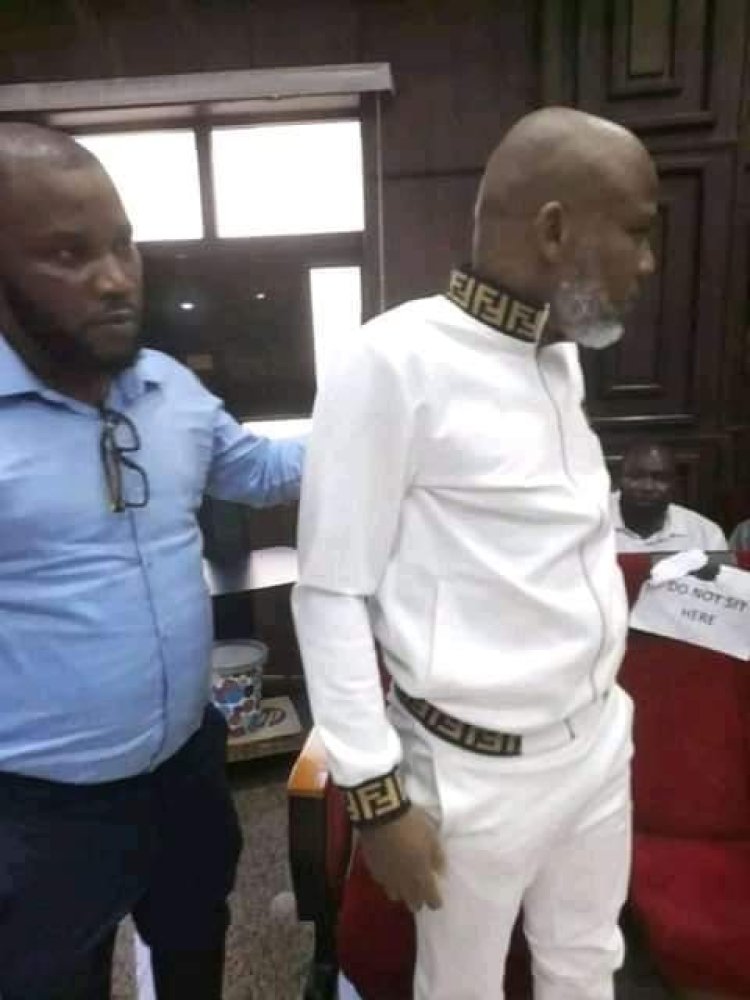 The detained leader of the Indigenous People of Biafra, IPOB, Nnamdi Kanu, was on Thursday, absent, as the Federal High Court sitting in Abuja, commenced hearing on an application he filed to quash the treasonable felony charge the Federal Government preferred against him.

Kanu, in the application he filed through his team of lawyers led by Mr Ifeanyi Ejiofor, is asking the court to acquit and discharge him of all counts in the charge.

He argued that the court lacks the requisite jurisdiction to try him on the basis of a charge he said was grossly incompetent.

The embattled IPOB leader contended that there was no proof of evidence attached to the amended charge against him.

According to him, “That no allegation was made in any of the counts of the amended charge that the alleged sundry acts of the Defendant/Applicant were physically carried out by him, within the geographical space or territorial boundaries of Nigeria.

That the only element requisite to constitute and found liability for incitement is the actual words allegedly uttered by the Defendant/Applicant.

“That the alleged acts for which the Defendant was charged, do not constitute terrorism offences in London, United Kingdom, where they were allegedly committed,” Kanu added.

Though trial Justice Binta Nyako had on November 10, adjourned further proceedings in the case till January 19, 2022, she however brought the date forward, following an application by Kanu’s legal team.

The IPOB leader had earlier applied to be transferred from custody of the Department of State Services, DSS, to the Kuje Correctional Center.

Even though the request was refused, Justice Nyako, however, ordered the DSS to grant him access to three visitors of his choice, every Monday and Thursday of the week.

Speaking with Vanguard shortly before the court commenced sitting on Thursday, a member of Kanu’s legal team, Mr Maxwell Opara, said the application to move him out of DSS custody would be revisited.

“For today, we are focusing on the application for abridgment of the trial date and for the charge to be quashed. However, if time permits, we will re-apply for his transfer to prison custody,” Opara added.

It will be recalled that FG had on October 21, re-arrainged Kanu on a seven-count amended charge.

FG, in the amended charge marked FHC/ABJ/CR/383/2015, alleged that Kanu had in furtherance of an act of terrorism, issued a deadly threat that anyone that flouted his sit-at-home order should write his or her will.

It alleged that as a result of Kanu’s directive, banks, schools, markets, shopping malls, fuel stations were not opened for businesses, with vehicular movements grounded in the South East region of the country.

It said the action amounted to an offence contrary to and punishable under 1(2) (b) of the Terrorism Prevention Amendment Act, 2013.

FG alleged that Kanu had “on or about the 28th April, 2015 in London, United Kingdom did in a broadcast on Radio Biafra monitored in Enugu, Enugu state and other parts of Nigeria within the jurisdiction of this honourable court, referred to Major General Muhammadu Buhari, GCON, President and Commander in Chief of the Armed Forces of the Federal Republic of Nigeria as a paedophile, a terrorist, an idiot and an embodiment of evil, knowing same to be false and you thereby committed an offence contrary to section 375 of the Criminal Code Act, Cap C. 38 Laws of the Federation of Nigeria, 2004”.

He was alleged to have committed treasonable felony, an offence punishable under Section 41(C) of the Criminal Code Act, CAP C38 Laws of the Federation of Nigeria

He was alleged to had between 2018 and 2021, through Radio Biafra, professed to be a member of IPOB, a proscribed organization in Nigeria, and thereby committed an offence punishable under section 16 of the Terrorism Prevention Amendment Act, 2013.

In count five of the charge, FG alleged that Kanu had on April 22, 2021, in London, the United Kingdom, on Radio Biafra monitored in Enugu and other parts of Nigeria, did an act of terrorism “in that you incite the other members (followers) of the Indigenous People of Biafra (IPOB), a proscribed organization in Nigeria, to look for security personnel, their family members through a Radio Biafra on 102.1FM monitored through the IPOB Community Radio, and you thereby committed an offence contrary to and punishable under section 1 (2) (h) of the Terrorism Prevention Amendment Act, 2013.

Attached in support of the amended charge dated October 14, included a seven-paragraphed affidavit of completion of investigation deposed to by one Loveme Odubo, a prosecutor in the Federal Ministry of Justice.

FG equally lined up five witnesses to testify in the matter, among whom are officials of the DSS and one Ronald S. who was identified as the manager of a Hotel in Lagos.