JUST IN: Emefiele Visits Buhari, May Shelve Presidential Ambition Amidst Pressure To Resign 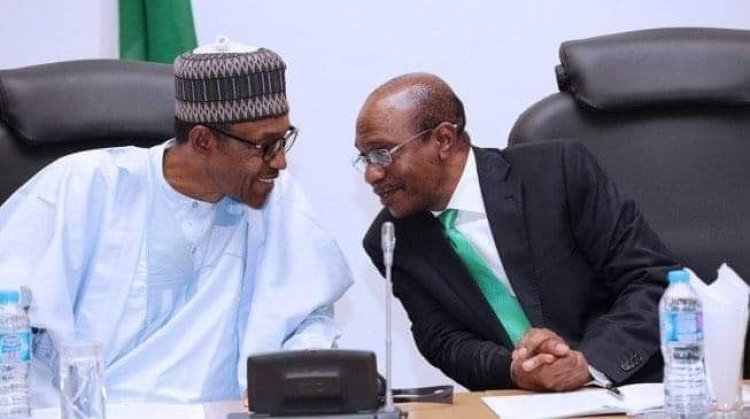 President Muhammadu Buhari on Thursday in Abuja met behind closed doors with the Governor of the Central Bank of Nigeria, CBN, Godwin Emefiele.

The agenda of the meeting between the president and Emefiele could not be ascertained as at the time of filing this report.

NAN, however, gathered that the CBN governor might have updated the president on the ongoing debate about his resignation or continued stay in office.

The president had on Wednesday via a circular issued by the Secretary to the Government of the Federation, SGF, Boss Mustapha, directed members of the Federal Executive Council, FEC, and other political appointees with political ambition to resign.

Mr Emefiele is among the heads of agency and extra-ministerial departments.

When accosted by State House correspondents to talk on the outcome of his meeting with the president and the speculation over his alleged resignation, the CBN governor simply said:

However, NAN reliably learnt that Emefiele might have informed the president of his intention to continue in office as CBN governor instead of vying for the All Progressives Congress’s presidential ticket in 2023 general elections.

The source, which preferred not to be named, told NAN that the CBN governor had finally decided to concentrate on his official job of safeguarding and transforming the nation’s economy.

Some farmers associations in the country had raised N100 million to purchase APC Presidential Expression of Interest and Nomination forms for Emefiele, ahead of the party’s primary on May 31.