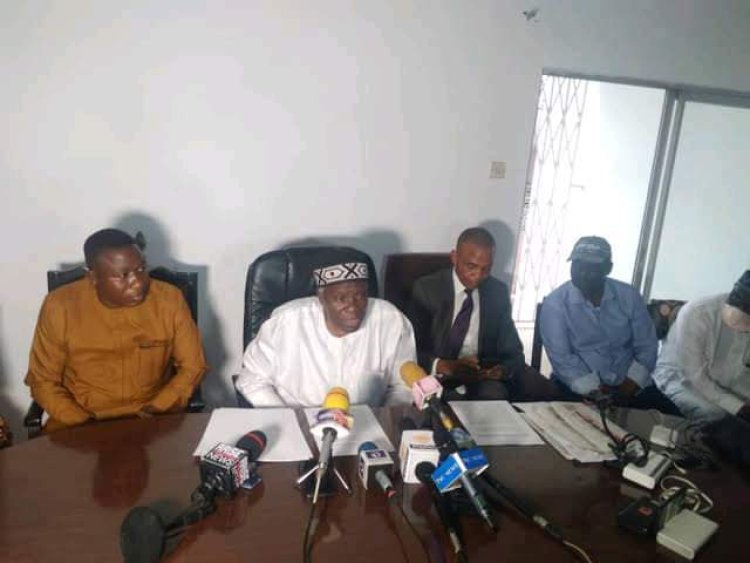 A presidential aspirant on the platform of the All Progressives Congress (APC) and a member of the Federal Executive Council is said to be coordinating the operations for the Buhari-led government, using some Yoruba groups as fronts to negotiate with Akintoye.

“The Nigerian government wants to kill the brand of Ilana Omo Oodua Worldwide (IOOW) just the way the defunct Yoruba World Congress (YWC) under Akintoye was killed before Ilana Omo Oodua was birthed,” one of the sources said.

“IOOW is targeted for dissolution, disorganization and destruction, unknowing to Akintoye, because of the suits currently being spare-headed by the organization at Federal High Courts in Osogbo, Osun-State and Ado-Ekiti, Ekiti State challenging the validity of 1999 constitution, which the group, through its Lawyer, Tolu Babaleye, argued, was enacted by the Military Government without a Referendum.”

Another reason the Nigerian Government is targeting Ilana Omo Oodua, according to the source, is that "the brand is considered as too respected by the Yoruba People Worldwide, the Diplomatic Corps, Foreign Media and Foreign Governments all over the world. Aside from Afenifere, the only group that the world institutions recognise as the voice of the Yoruba people is Ilana Omo Oodua Worldwide so the government wants to scatter the group from the top so that the agitation for Yoruba Nation and the suits in Ado-Ekiti and Osogbo can be curtailed.”

Speaking further, another source privy to the plans of the Nigerian government said Akintoye, in a naive way, is considering the offer tabled before him by the government representatives.

"The N500m was not tabled as a direct bribe before Akintoye. It was tabled indirectly. He was offered advice by some Yoruba groups to quit as the Leader of Ilana Omo Oodua Worldwide and become the father of all Yoruba groups, and Akintoye considered it as an elevation of his status. It started in 2021 when Yoruba Self-Determination Movement (YSDM) was formed but Akintoye failed to get the support of his close allies then.

Another set of Yoruba groups have been mobilised to mount pressure on Akintoye again, this time, with a tempting offer. The Nigerian government believes that Afenifere has lost its bite, lost touch with the grassroots, and lost confidence of the teeming masses in Yoruba Land, and the apex organisation the masses see and adore at the moment to be championing their interest is Ilana Omo Oodua under Banji Akintoye.

"Banji Akintoye has been told that he will head the Yoruba National Fund Worldwide. N500 million has been made available to be deposited into the account. But there's another strategy being put in place by the anti-Yoruba Nation elements pushing Akintoye into infamy to ensure that he won't ever get the money to spend after deceiving him to dump the structure that brought him into the limelight again since leaving the political space in 1983.

"I am surprised that Akintoye could be that naive. You can never be the father of everyone. Even when we had Yoruba World Congress, not everyone subscribed to his leadership. We had Yoruba Summit Group then. Not everyone subscribed to the leadership of Awolowo during his reign. Some people don't even believe that God exists. You can never be loved and accepted by everyone.

"Accepting the proposal of these Yoruba groups engineered and oiled by an APC presidential aspirant serving the interest of the Fulani Caliphates is unbecoming of a well respected Akintoye. But I doubt if he can even have the courage to say his choice to the teeming members of Ilana Omo Oodua Worldwide. This is going to ruin him completely because this is a case of betrayal of trust of the Yoruba people,” the source said.

When contacted, Maxwell Adeleye, Communication Manager to Akintoye said he wasn’t aware of any meeting or new group.

He said, “Baba naturally, is a father of all. He is a Pan-Yoruba person. The Akintoye that we know is not materialistic. He can't be bought. At age 87?

“I am not aware of any meeting or group. All that I know is Ilana Omo Oodua Worldwide under Akintoye is committed towards the actualisation of our peaceful struggle for Independent Yoruba Nation.”