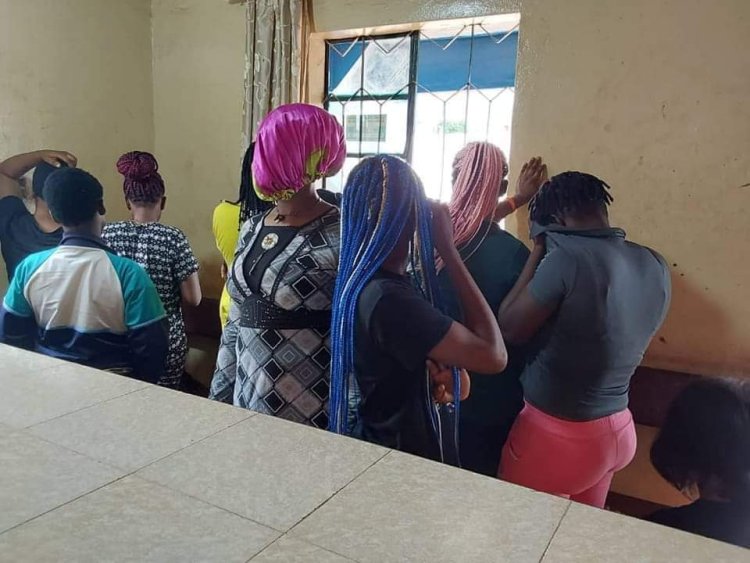 As part of our efforts to curb crime and illegal activities in the country, the Tourism Security Unit command conducted a raiding exercise today whereupon 11 suspected sex workers were arrested. All of the suspects are Nigerian Nationals who are between the ages of 22 to 34 years.

• According to the preliminary report, these ladies have been operating tactically, thus detecting  their activities was even more difficult unless they were reported to the police station.

• The suspected sex workers  are usually brought in by other experienced workers who would put them through a spiritual initiation of either taking an oath or taking their pictures to a shrine to swear that they will pay all the expenses spent on their travel, failure of which can lead to madness or even death.

• A widow and mother of three who is nicknamed ‘Happiness’ narrated how she came to The Gambia by land through an agent who she works for. According to her, she should pay a sum of D200,000 (Two Hundred Thousand Dalasi) to her master for the travel expenses while on her way to The Gambia

• She also claimed to have already paid D120,000 but she was later sent out of the house on allegation of her involvement in thievery. Consequently, her boss forced her to hand over all the money she had been saving.

• In her Street walking business, she claimed that she makes two or three thousand Dalasis per night, depending on the market. She claimed to have been saving some money for her return to Nigeria and reunite with her family, but at the same time repaying the remaining sum of loaned money to her defunct boss.

• When asked if she was aware of her purpose of being trafficked, she confessed that she was informed about it with two other ladies, who abruptly rejected the idea after being told about some spiritual undertakings. She claimed to have consented because she needs the money to support her children, but some of her colleagues were deceived as they came with the hope that they were coming for lucrative jobs and businesses.

• The arrested suspects will be handed over to The Police Special Intervention Unit for further investigation.