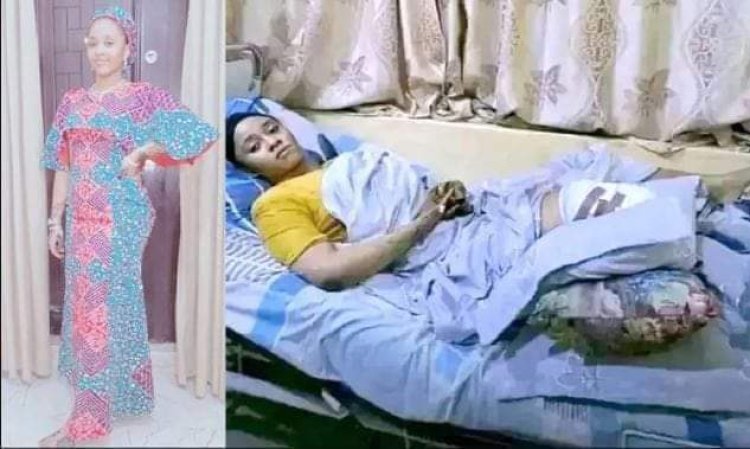 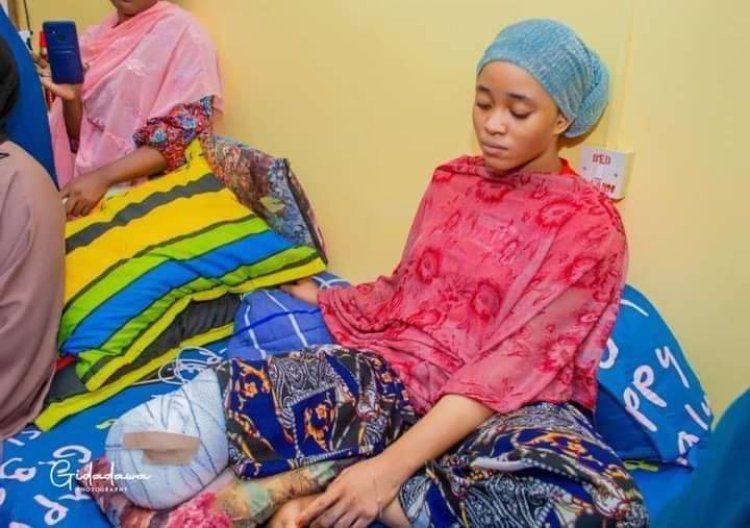 Stunts by a student celebrating secondary school graduation has cost another student, a bystander, her legs. Daily Trust on Sunday reports.

Fatima was a student of Khalifa International Model School, located along Nana Asma’u Road Sokoto. After writing their final examination, Fatima and her friends came out from the examination hall amidst jubilation, exchanging contacts and singing autographs

It was during this joyful moment that she received a call from her mother that she was on her way to pick her up.

Daily Trust on Sunday gathered that Fatima and her friends then went and sat outside the school premises to wait for her mother. At that moment, a student from another school came around in his car to display some stunt driving.

“I was sitting with my friends when the guy came on high speed and splashed stagnated water on us. We reported him to our school authority and he was asked to leave the area.

“But instead of heeding to their warning, he continued with his stunt driving and then lost control of the car. We tried to escape but unfortunately for me, I missed a step and fell down and the vehicle ran over one of my legs but my two friends were lucky to escape unhurt.

“I was then brought to the Trauma Centre of Usmanu Danfodiyo University Teaching Hospital where after examination, the doctors concluded that my limb has to be amputated in order to save my life,” she said.

Fatima said her ambition is to become a medical doctor, adding that what befell her would not stop her from achieving her ambition.

“I have been nurturing this ambition for long because my father is a medical doctor. I wrote JAMB this year and scored 230,” she said.

Her father, Dr Suleiman Sabah, said he was in his office at the Federal Medical Centre Gusau when his daughter called him with another number around 2.30pm.

“When I picked the call, I heard her crying, saying ‘Daddy come back, I am dying’. I then asked her what happened and she told me somebody hit her with his car before the phone went off.

“I called the line again and the owner told me what happened to my daughter and that he and the school management were taking her to UDUTH for treatment. I then tried to reach out to her mother who is a staff of the hospital but to no avail. So, I called somebody in the hospital who informed her (the mother) about what happened and met them at the trauma centre.

“When I later got her, she told me that one of Fatima’s legs was severely injured and the doctors were contemplating amputation. I said no, I don’t want my daughter’s leg amputated. I then asked her to connect me with the doctor on call which she did and I pleaded with him to do everything possible to salvage the leg but he told me the damage was beyond salvation.

“I asked him to connect me with the head of the department Dr Muhammad who also confirmed that they were preparing to wheel her to the theatre for amputation but I asked them to hold on.

“I called a friend who works with the Orthopaedic Hospital Dala who requested for the picture of the leg and after observing the pictures, he too concluded that the damage was beyond salvation; that I should take heart and allow for the amputation. So, I gave them my approval,” he said.

Daily Trust on Sunday learnt that the driver was later arrested and arraigned before a magistrate court which granted him bail on Thursday.

Speaking on the bail, the father wondered why the court would grant bail to the driver while his daughter was still in the hospital.

“The parents of the driver who claimed to be 18 did not show any remorse over what their child did. In fact, they only visited my daughter three times since the incident happened.

“When I arrived Sokoto, I and my lawyer sat with the parents of the child based on request of their lawyer who wanted the matter settled out of court. During the meeting, we agreed that my daughter would be taken abroad where she would get the best treatment and an artificial limb.

“We contacted three hospitals. One in Germany, one in Dubai and another one in England and we sent them all the necessary documents. As we are waiting for their response, I learnt that the case was transferred to the state’s CID and the state Commissioner of Police later summoned us to his office.

“After listening to us, he faulted the boy and ordered for prosecution. So, I received a call from the police that the case would be taken to a magistrate court for mention and when I and my lawyer went there, we were told that the presiding magistrate ordered the prosecuting police officer to go and amend the charges because it contained culpable homicide.

“From the amended charges, I knew that the case was being compromised because there is nothing like grievous body injury and the magistrate granted the suspect bail. We later complained to the Attorney General of the state who asked us to write a petition against the magistrate and the police and this is what we are doing now,” he said.

When contacted, the spokesman of the school, Mr Ineke Joseph, said Fatima was one of their brilliant students who was even pencilled down for award during their Speech and Prize Giving day which has been postponed in her honour.

“After the incident, we summoned an emergency meeting of parents and it was agreed the event should be postponed pending the time she is fully recovered. We hope and pray for her quick recovery because we want her to participate in the event,” he said.

Joseph, who described the incident as unfortunate, said they were lucky that there weren’t more casualties based on what they saw in the video of the accident.

According to him, the police investigation showed that Fatima was sitting 13 meters away from the main road when the incident occurred.

“So, she was not standing or sitting close to the main road. She was sitting with her friend on the staircase leading to our conference room,” he added.

While stating that the driver was not their student nor has any relation in the school, Joseph said the school has, however, taken both structural and non-structural measures to avert the reoccurrence of the ugly incident.

“We have bought drums which were stone-filled and cemented. They would be used to barricade the school from the main road. And we have contacted the relevant authorities on the need to construct speed bumps and put zebra signs on the road,” he stated.