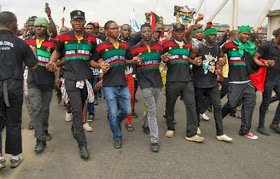 Two things are happening simultaneously in south eastern Nigeria right now. On the one hand, separatists and other unknown groups are busy burning police stations and other federal government infrastructure in the region. On the other hand, there is a reluctance, or as a senior colleague put it to me recently, there is an ‘ambivalence’ in the national conversation about what to call these acts and those who perpetrate them.

On the first, the headlines are clear enough with increasing regularity in recent weeks: “Again, unknown gunmen raze Abia police station, kill two cops in A’Ibom” (The Guardian, 29 April 2021); “Uneasy Calm as Police Desert Streets in South East” (Daily Trust, 02 May 2021); “Truck loaded with ammunition discovered in Anambra” (Premium Times, 10 May 2021); “Five suspected IPOB members arrested over alleged killing of police operative. Police and other security agencies have been the targets of deadly attacks in South-east and South-south regions” (Premium Times, 15 May 2021).

If these are only a few selected headlines, they are still clearly suggestive of the general turn of events in southeastern Nigeria in recent months. It is sad, however, that there is not much clarity but plenty of ambivalence in the media and the general public about how to describe these acts and their perpetrators, leaving the detached observer with the alarming feeling that we have walked this path before.

As anyone familiar with the still ongoing tragedy of Boko Haram would tell you that the headlines above reflect how the whole thing it started. From the slippery slope of attacking police stations and policemen, like play, like play, as we say in Nigeria, Boko Haram quickly morphed into a most devastating religious insurgency that more than a decade later, we are still grappling to contain. For this reason alone, one would expect more nuance and introspection in how the media approaches and reports these events in the South East.

Instead, on both social and mainstream media, IPOB members are celebrated as ‘agitators’, and their activities glorified as ‘a fight for self-determination’. Hardly any media refers to such activities as terrorism, insurgency, or violent secessionism, all of which they are. When an organisation, or any persons linked to it, take to burning down police stations and attacking policemen, what they are doing is simply called terrorism, regardless of whether it is for religious or secessionist purposes.

After all, the United States’ Federal Bureau of Investigation (FBI), for example, defines terrorism simply as “the unlawful use of force or violence against persons or property to intimidate or coerce a government, the civilian population or any segment thereof, in furtherance of political or social objectives”. The key to what constitutes terrorism is the violent acts committed, not by whom or for what political or religious purposes the actors use to justify their activities.

Such ambivalence in about naming similar acts differently if committed by different persons has a long history in Nigerian media and politics, and it is perhaps borne out of the need to distinguish between IPOB, or indeed militancy in the Niger Delta, from Boko Haram. Or perhaps, Nigerian newspapers are taking a cue from the international media which for years created and fostered the impression that terrorism is terrorism only when committed by Muslims or in the name of Islam. Or perhaps it is just the plain ignorant assumption that using violence in the name of religion is a different thing from doing the same thing for political purposes.

All of these are false premises, however. It is true that even among well-known terrorist organisations, Boko Haram are still a different beast altogether. It is also true that the scale of violence used by Boko Haram does not compare to anything we have ever seen in Nigeria. But it beggars belief that Nigerian newspapers, some of which do not refer to an elected Buhari as ‘President Buhari’, still have no qualms describing the leader of IPOB as ‘Mazi’ Nnamdi Kanu, a title denoting high respect and regard for the holder in Igbo land.

There is a difference between opposition to a government and support for rascality and criminality, and our media needs to be clear about this. Moreover, differences of degree must not be confused with differences of kind. Boko Haram is a far more violent organisation than the Niger Delta militants, and on recent evidence, than IPOB. But the differences between them are more of a degree, than of a kind, much like the difference between a group of trees and a forest, not like that between a forest and a cave.

To the extent that all three use violence or threats of violence as part of their overall approach, they are all terrorist organisations, and a responsible media system cannot shy away from this. Even in the international media, there has been a significant change on this. American media had no hesitation in calling out those who stormed congress earlier this year as right-wing terrorists, nor did the media from elsewhere.

But the real point here is not exactly about whether or not we chose to give different names to similar events with similar outcomes. The problem is just the name we call things, but the consequences of the name we call things. The consequences of this ambivalence are already here with us in public perception of and attitudes towards IPOB and their increasingly violent activity. Let me elaborate on just two.

First, while IPOB has of late turned increasingly violent in its approach to achieve its secessionist ends, ambiguity in the media about what they are doing has only helped to deflect attention away from the danger they represent, or could represent. Worse than that, it is helping to cultivate emotional and moral support for their actions. Many so-called civil society and socio-cultural organisations, among them Ohaneze, Human Rights Writers Association (HURIWA), World Igbo Assembly, and so on, have been quick to denounce the government of state-sponsored terrorism, or ethnic profiling. But no word from them even of caution for the IPOB insurgents. Again, this is a dangerous road that we have travelled before, with scarring consequences.

Above all, violent agitations of any kind can easily take a life of its own, separate from the intentions or expectations of its original founders. All that maybe needed is just once chance event, however remotely, and things could well get out of hand quite suddenly. This is precisely the history of both Boko Haram and militancy in the Niger Delta, the ashes of which are still yet to burn out. The fact that ‘Biafra’ is a far more emotional subject among more Igbos than Boko Haram’s extremist ideology ever was among Nigerian Muslims makes the situation even more delicate. There are certain circumstances where a word is enough even for the foolish. This is one. There is still enough time to avert this. Let’s seize it by first calling a spade by its real name

NIGERIA'S BOKO HARAM MILITANTS: SIX REASONS THEY HAVE NOT BEEN DEFEATED – BBC