Pantami Positions NITDA on the Path of Sustainable Development, Unveils Employee-Centric Condition and Scheme of Service 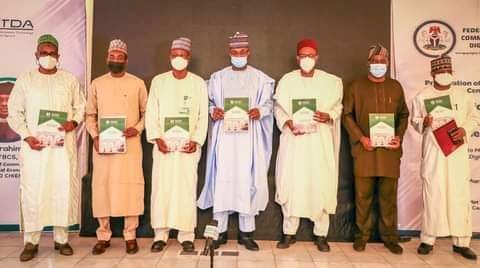 4 years down the road, the Honourable Minister of Communications and Digital Economy, Dr Isa Ali Ibrahim Pantami FNCS, FBCS, FIIM has matched his words with action and lived up to the pledge made.

In his address, the Honourable Minister, Dr Pantami extended his heartfelt gratitude to His Excellency, President Buhari for the great support his rendering to the digital sector in Nigeria which is yielding positive result, as according to (Q4 2020) Gross Domestic Product (GDP) report recently released by the National Bureau of Statistics (NBS), the ICT sector recorded a 14.7% growth rate, making it the sector with the highest growth rate in Nigeria and the only sector with a double digit growth rate.

“This Scheme of Service will serve as a veritable tool for making the Agency more functional as it develops into becoming one of the most strategic government institutions in Nigeria”, Pantami said. Adding that, “The Conditions of Service is to re-engineer the operations and structure of the Agency to provide an enabling environment for effective strategy development and execution”.

Pantami further charged the Board and Management of NITDA to ensure that there is a significant improvement in the performance of the Agency, stressing that, to who much is giving, much is also expected.

What has become of journalism in this country? In the past, you could put some trust...

Unbalance justice.... Those who were  murder suspects were released on health ground