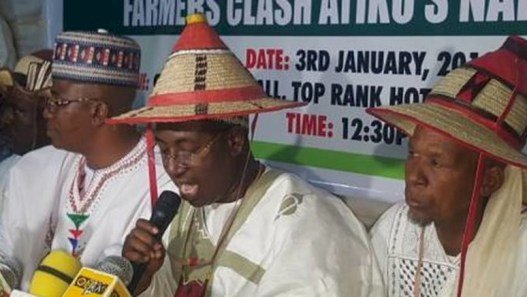 The National President of Miyetti Allah Kautal Hore, Bello Abdullahi Bodejo, has said that cattle rustlings and incessant attacks by their members led to the formation of its security outfit, Miyetti Allah Vigilance group, which will operate all over the country. Speaking with VINCENT KALU after the outfit was launched July 27, the leader of the Fulani Socio-Cultural Association stressed that no opposition can stop its operations in any part of the country.

The launching of the Miyetti Allah Vigilance group has not gone down well with other geo-political zones, as they argue that your security outfit should be confined to your region, the north and not all over the country

We launched the Miyetti Allah Vigilance group on July 27, and we started with 1000 personnel, who are still undergoing training with Vigilante Group of Nigeria (VGN). You know Fulani people are moving; moving to those arrears where there are grasses. Any place where there is grass, they will operate there to see how they can feed their cows.

So everywhere they are, the vigilante is supposed to be there, that is why our vigilante will be everywhere in the country because of these cattle rustlers and they will be the ones to make peace in the event of problem between the herdsmen and farmers. That is the reason they will be operating every part of the country. Amotekun of Southwest is just saying its own. If they want to do security to fight crimes, what is their problem with our own vigilante? Let them concentrate on what they are doing. Our vigilante is the same thing with Amotekun, but the only difference is that ours is all over the country, while Amotekun is in the Southwest.

Yoruba are all over the country, but they didn’t set up Amotekun in every state of the federation

That one concerns them. If they are all over the country; they are not operating in the bushes and forests. For the Fulani, their business and all what they are doing is their cows. But if you can see Yoruba man or a person from any other tribe, who can carry N1O million cash in transparent bag and move from Lagos to Adamawa, or from Lagos to Ibadan, that person can be attacked by armed robbers or other criminals who can even kill him. The same way with the Fulani; they are moving with their money in transparent bags, which are the cows. So, the cow is like bank to them. If you build bank, you must fence it to secure it, but if you build bank and you put money there without fencing the building, do you think you can go there tomorrow and meet the money? Thieves will go and steal the money by force. So, that is the reason Fulani are having problems of securing their cows because no one is protecting the cows (which is their money in transparent bag). So, our vigilante group has to operate very well because of the level of insecurity in this country; cattle rustlers, kidnapping, bandits are operating inside bushes and forests.

Our people have been victims and they have suffered more than any ethnic group, but there is no media to report that; there is no journalist who would go inside forest to report their plights. In those bushes and forests, there is no telephone network or coverage so that makes our security challenges more difficult.

It’s only Fulani man that can trek from Lagos to Bauchi. Our vigilante will support the police and the military.

Even like Amotekun, the Southeast and South-South already have their vigilantes; why has the vigilante of Miyetti Allah come to be their problem? They don’t have any reason to oppose it. Fulani are already in VGN that is operating all over the country. About 75 per cent of its personnel are Fulani, but they are not making a noise. Our vigilante is not the type that will be causing trouble here and there.

If you are talking about Benue State, the governor used the Fulani herdsmen- farmers’ crises as campaign issue during his reelection because he has not done anything for the state. He used this issue to whip up sentiments and to draw support from his people. However, even though he won the election, Benue people are very educated and enlightened that is why you don’t see any group opposed to the Miyetti Allah Vigilante. The Benue State government has already enacted anti grazing law, and they have sacked Fulani from their state; so, Fulani are no more in that state, and the indigenes of Benue have already started cattle business. You see cows moving around there, they allegedly belong to the governor and other people of the state, and that is why you hear the governor saying they don’t want our vigilante to come and operate in his state.

Fulani herdsmen are not rearing dogs, pigs or goats; they are operating where you have Fulani, so there are no more Fulani in Benue as they have been sacked from the state. If all the states in Nigeria are talking or opposing our vigilante, Benue State governor Samuel Ortom or the Benue people shouldn’t join them to comment on the security outfit. Our members have lost more than three million cows in Benue.

The federal government is talking about community policing model, couldn’t it have solved the security challenges of your people instead of setting up vigilante group?

In Plateau and Nasarawa, as well as other states, we are backing the Inspector General of Police community policing model. It is a welcome idea, but our people have already gone far with the vigilante security outfit. It is not only the community policing, whatever policy that the IGP, the military or DSS introduces to solve the security problems of the country, we will support it 100 per cent. Our own concern is to let this cattle rustling stop, let this kidnapping stop and let peace be brought back to our people and the country.

As you know, community policing is for everybody, so Fulani will also be part of it, but you can’t stop Miyetti Allah Vigilante, which is voluntary to help to protect our people . Like in Nasarawa, we had a meeting with all the emirs in the state over some areas in the state where banditry, kidnapping and cattle rustling were taking place. The emirs just called Fulani and directed them to go and flush out the criminal elements from that bush and if possible nab them so that they can be brought to book. Fulani are rearing cattle and they know bushes more than any group; they are very good hunters because they are on ground in the bushes.

When Amotekun was being set up, the federal government kicked against it, and said that community policing was coming up to solve the security problem, so why did the Miyetti Allah go ahead to set up its own?

If the federal government directed us to stop setting up the Miyetti Allah vigilante, we will obey, but I don’t think the government can stop VGN that has been operating for many years, and was established under relevant laws. This VGN was formed by a Fulani, Captain Usman Jahun (retd), who is the commandant general; he is a member of Miyetti Allah Kautal Hore-Fulani Socio Cultural Association. The vigilante is already operating, what we have done is to identify the people, know who they are and increase their number. For example, we can see how to add more personnel to Ibadan, or Enugu and other places.

After launching it, what has been the federal government’s reaction?

The VGN is already operating everywhere and it is not new. The only thing new is that we have added 1000 Fulani to join them and be trained. The name of our security outfit is Miyetti Allah Vigilante under VGN. We will also take them for more training and thorough screening by the civil defence corps. We launched it on July 27 in Abuja; we gathered Fulani leaders and Captain Jahun (retd), the VGN commandant. We collaborated with him and formed the vigilante under VGN. Before this time, there were already many Fulani personnel in the organisation. We want to recruit more.

The 1000 personnel are still undergoing training, and since we are not hiding anything, very soon, people will see them, as their uniform will be different from VGN. It is how we can bring back our peace in this country between farmers and Fulani.