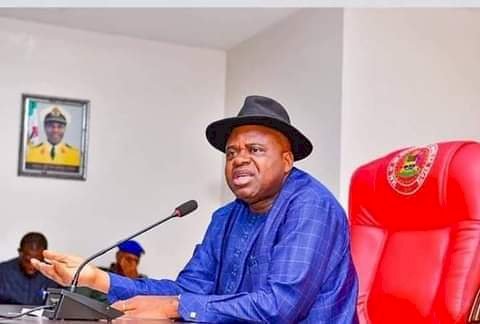 Governor Douye Diri, has advocated the management of the funds for ecological challenges in the country by states and not the federal government in Abuja.

He expressed worry over the current situation where ecological funds were managed in Abuja by people that know little or nothing about the ecological problems of the states.

This is contained in a statement issued by his Chief Press Secretary Mr Daniel Alabrah and made available to the News Agency of Nigeria (NAN) on Saturday.

Diri spoke in Government House, Yenagoa, when he hosted members of the House of Representatives Committee on Ecological Funds.

Alabrah quoted the governor, as expressing appreciation to the committee for the visit, saying Bayelsa State needed sufficient ecological funds given its numerous environmental challenges.

He described the ecological committee of the house of reps as germane to Bayelsa given the fact that the state was below sea level and had many ecological problems.

He said: “I appeal that if we want this country to develop, then we have to sit up as legislators so that at the end of the day the executive arm will know that there is an arm of government that had been given that responsibility to oversight and ensure that there are checks and balances.

“These ecological issues are actually in the states, but ecological funds are in the centre and managed by people who do not know anything about the ecological problems.

“So when we talk about the ecological problems we have in our states they do not understand,” he said.

The governor noted that if legislators lived up to expectation, Nigeria would be a better place to live in.

He described the legislative arm of government as the bastion of democracy given its constitutional powers.

Earlier, Chairman of the House Committee on Ecological Funds, Rep. Isiaka Ibrahim, said they were in the state as part of their oversight functions with a view to seeking areas of partnership with the state government.

He expressed the readiness of members of the committee to help the Governor, succeed and urged him to feel free to approach the committee for support in areas within its power.