Soldiers dragged Benue warlord, Gana, out of govt convoy before he was killed – Community leader 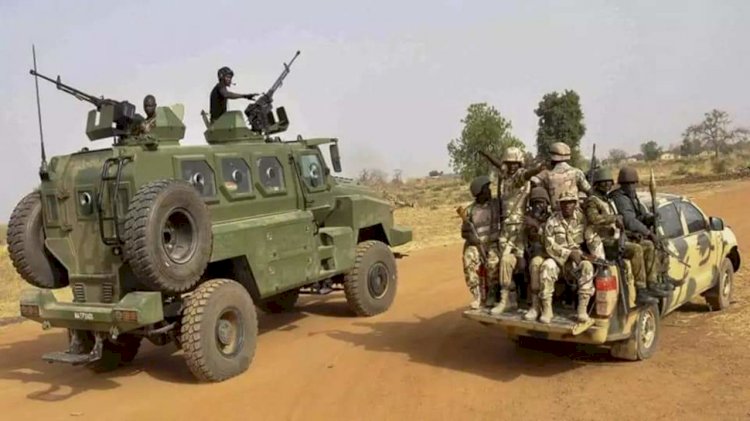 More facts on Wednesday emerged about how a notorious militia leader in Benue State, Terwase Akwaza, aka Gana, was killed  by the military on Tuesday despite embracing amnesty.

A community leader, who confided in one of our correspondents in Makurdi, the state capital, said Gana was in a government convoy when he was dragged out of a car by soldiers at a checkpoint in Gbitse,  near Yandev roundabout in  the Gboko Local Government  Area of the state.

The  community  leader said the militia leader  was thrown into a military vehicle and driven away.

The Commander  of Operation Ayem A Kpatuma,  Major General Ali Gadzama, had on Tuesday told Channels Television that Gana was killed in a  gun battle with soldiers.

But it was gathered that the militia leader  had   between 11am and 2pm on Tuesday  at the Katsina Ala Stadium in the presence of prominent indigenes of the Sankera District of the state, including the First Class Chief of the area , His Royal Highness, Abu Shuluwa, embraced amnesty.

The  Sankera zone consisting of  Logo, Katsina-Ala and Ukum local government areas has been the worst had hit by the activities of Gana and his gang since 2009.

The militia leader and others had in the state Government House in 2015 surrendered no fewer than 200 guns including AK – 47 rifles .

But the peace move was thwarted after the killing of the Senior Special Assistant to the state Governor on Security, Denen Igbane , in 2016 . After the incident , the militia leader went back to the bush .

The community leader , who confided in
The PUNCH, said the latest peace move efforts were initiated by some prominent indigenes, who urged Gana to drop arms and embrace peace .

The source said , “ He ( Gana ) actually came out because of the assurance given by the prominent indigenes and traditional rulers and he was not armed when he was dragged out of the car and taken away to be killed .

“ The militia leader sat in – between the Chairman of the Katsina – Ala Local Government Area, Alfred Atera , and a priest in one of the cars in the government convoy . ”
According to the source , the convoy was stopped by soldiers at a checkpoint in Gbitse on its way to Makurdi.

He stated, “ As soon as we got to the military checkpoint , some soldiers who spotted Gana had to pull down the priest , drag Gana into their waiting vehicle and zoom off. ”

Meanwhile , there were fears in the Sankera zone on Wednesday as residents thought that members of Gana ’ s gang could carry out attacks on the area .

A trader in Katsina – Ala , who spoke on condition of anonymity , said , “ We heard that many of the repentant militias who saw what happened along the road turned back and they might likely return to the trenches .

“ These people may see it as betrayal and want to unleash terror on the people in this area . ”
On his part , the state Governor , Samuel Ortom, expressed shock over the arrest and killing of Gana by soldiers.

The governor , in an interview with journalists at the Government House , Makurdi on Wednesday , explained the second amnesty programme of his administration which covered the Sankera geopolitical zone .
The governor said that he was still awaiting briefing from the commander of Operation Ayem A Kpatuma .

He said the commander promised to come and brief him on the operation .
When asked if the amnesty programme had not been thwarted by the killing of Gana, Ortom said that the programme was not truncated as those who could not get to Makurdi due to the confusion created by the military operation would be given another chance.

He urged the people of Sankera to remain calm as he was still investigating circumstances surrounding the arrest and killing of Gana.
He said , “ Shortly after we left yesterday night, there was a press statement issued by the special force , that is Operation Ayem A Kpatuma, in Doma, Nasarawa State .
“ I reached out to the commander of the force and told him that I was surprised and needed an explanation .

“ He assured me that he would come and brief me, but I must say that I am surprised by what happened . I do not want to take issue with the military but I have a duty to protect the lives of the people . ”

Suswam urges FG to set up judicial panel
Also , a former governor of the state and senator representing the Benue North East Senatorial District , Gabriel Suswan, urged the Federal Government to set up a judicial panel to unravel the alleged killing of Gana by soldiers.
Reacting to the incident in a statement in Abuja titled , ‘ A time to heal , ’ Suswam said the soldiers ’ action could frustrate the peace already being achieved in the state following Gana ’ s decision to embrace dialogue and to surrender his arms.

Suswam said , “ Even war criminals captured alive are entitled to certain rights .
“ The claim that Gana was killed in a gunfight needs further explanations because those who accompanied him and who watched him being taken away , including his local government chairman, do not believe he was in possession of any arms.

“ An independent judicial commission of inquiry will unravel facts of the matter to serve as lessons for the future . ”
Appealing for calm , he said , “ The events of September 8 , 2020 in my senatorial district where repentant criminals who had surrendered after extensive persuasions were singled out and killed extra – judicially leaves a sour taste and has opened a gaping wound that requires all efforts to heal .

“ It is no secret that my senatorial district has been traumatised and the people terrorised by activities of criminal gangs led by Mr Terwase Agwaza alias Gana for many years .

“ The consequences of this endless terrorism have been a steady decline of economic and social activities leaving a once prosperous people pauperised .

“ Markets no longer attract traders , schools are closed and farmlands abandoned. Politics in the area has become a war with uncontrolled proliferation of dangerous weapons.