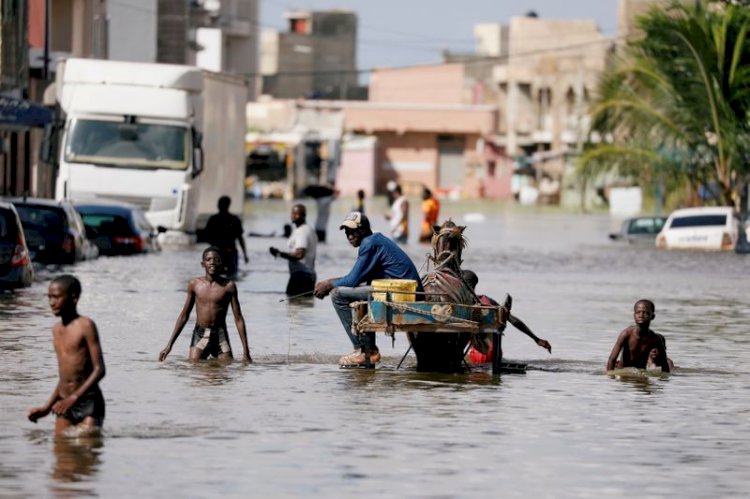 NIAMEY, Sept 10 (Reuters) – Nigerien student Hachimou Abdou has had to catch a boat to classes since river water swamped his route to university in the capital Niamey – one of about 760,000 people hit by severe flooding in recent weeks in parts of West and Central Africa.

Floods are common during the rainy season, but in recent years climate change, land degradation and poor urban planning have led to more frequent disasters as rapidly-growing cities struggle with heavier-than-normal rainfall.

Burkina Faso, Cameroon, Chad, Ghana, Niger, Mali, Nigeria, Congo Republic and Senegal are among those worst-hit this year, with at least 111 people killed, according to latest figures from the U.N. Office for the Coordination of Humanitarian Affairs (OCHA).

Waters have yet to recede in parts of Niamey since torrential rains in August caused rivers to burst their banks, destroying nearly 32,000 houses and 5,768 hectares of farmland across Niger.

“I have to get to university – either I take a boat or I walk in the water,” Abdou said, before settling into a traditional wooden pirogue to travel up the flooded highway.

Flooding across landlocked Niger alone has so far impacted nearly 333,000 people. Over 188,000 people have been affected in neighbouring Chad, with OCHA warning of potential food shortages due to inundated land.

Communities’ ability to cope with natural disasters has been eroded by instability, food shortages and mass displacement in some areas. Over 25 million people are in need of humanitarian aid in the violence-plagued Sahel area, which includes Niger, Chad and Mali.

“Many of those populations live in flood-prone areas. It’s just a matter of time for them to be at risk of epidemics,” Belanger said, describing how quickly diseases can spread once floods wipe out access to clean water and sanitation.

9 houses, factories and facilities belonging to Aziz were...