Secessionists, Wasting Their Time , Nigeria Will Remain One United Nation’ 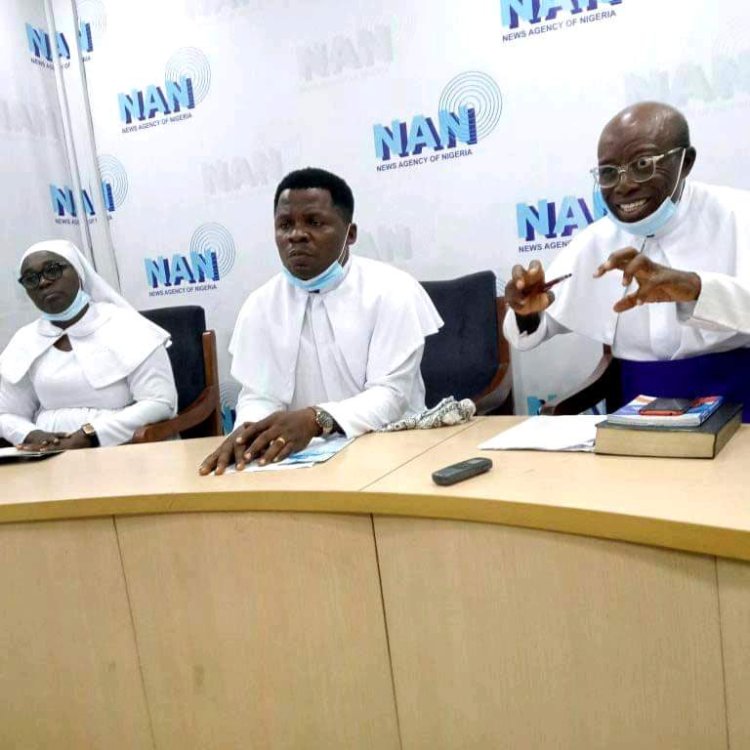 Brotherhood of the Cross and Star (BCS), a Christian religious organisation, has said that some sepratists agitating for secession were wasting their time, assuring that “Nigeria will remain one united nation.”

BCS, founded by Olumba Olumba Obu in Calabar in 1956, said this when its
Bishop of Lagos, Jude Uwaezuoke, visited Lagos Office of the News Agency of Nigeria (NAN) on Friday.

NAN reports that the visit was part of annual weeklong commemoration of the organisation’s Feast of Divine Manifestation.

Uwaezuoke said the prophecies of its Spiritual Head, Olumba Olumba Obu, had assured that “agitators were wasting their time because Nigeria will not break up”.

“When you are talking about this division, our leader said those agitating are wasting their time.

“He said that he has arrested all those causing confusion, kidnapping and other crimes.

“He said he has arrested all. It is not a revelation, it is an order. He made the pronouncements early this year,” the BCS Bishop said.

The clergy man said that after a week of the order by their leader, the IPOB leader, Nnamdi Kanu, was arrested.

He said Olumba Olumba Obu also predicted an end to the Coronavirus and immediately a vaccine was found for the pandemic.

Also speaking during the visit, another BCS cleric, Paul Ikpi, said Olumba Olumba Obu did not believe in the division of Nigeria, saying God is after the unity of Nigeria.

“Division is not the solution to what we are facing because people can divide today and if there is no love, understanding and there is greed, there cannot be peace.

“If, for example, 10 of us are children of the same father and there is an oil well in my father’s land, if there is greed, can that oil bring peace? One man would want to take that oil and kill every body.

“So, the problem of Nigeria is not in agitation; Igbo can divide, Yoruba can divide, but if there is no love, forgiveness, tolerance, if there are no virtues of God instilled and embedded in them, there will still be division and confusion,” he said.

Speaking on the security situation in the country, Ikpi said return to the truth would resolve the challenges.

“The insecurity and everything that is facing the country today is because of desperation. which is lack of the Holy Spirit,” he said.

He warned Nigerians against justifying crime as. according to him, unemployment in Nigeria is not the reason for crime, insecurity, banditary and kidnapping.

The only thing government can do is to key into God’s plan because if a good leader falls into God’s plan, God would direct that leader because even some leaders are governed by greed and carnal exposition,” he said.

Ikpi said the Holy Spirit would help leaders to become sensitive to the needs of those they are leading as contained in the teachings of Olumba Olumba Obu in his book entitled ‘The Everlasting Gospel.’

He said that the BCS leader encouraged members of the organisation to participate in politics so as to sanitise the system.

“Our advice for the nation and for the leaders is that Nigerian leaders need to submit themselves and key into God’s divine plan, do away with greed and personal interest,” he said.

He said God’s plan would help the nation’s leadership to become servant leaders.

Speaking on rape and defilement of minors, Chinwe Wali, a female BCS cleric said that the vices were rising in Nigeria because humans had deviated from God’s love and nature.

Wali said God was concerned about rape and defilement of minors and called on Nigerians to embrace His love to kick the menace out of the society.

“It is a very serious matter as far as the father is concerned and I will say that the cause of minor defilement is that man has deviated from the laws of nature, from the teachings of our Lord Jesus Christ.

“If that man that is defiling the child has the love of God, he will not do that, knowing that Christ dwells in every one of us here because He created us and it is His Spirit that is keeping us going,” Wali said.