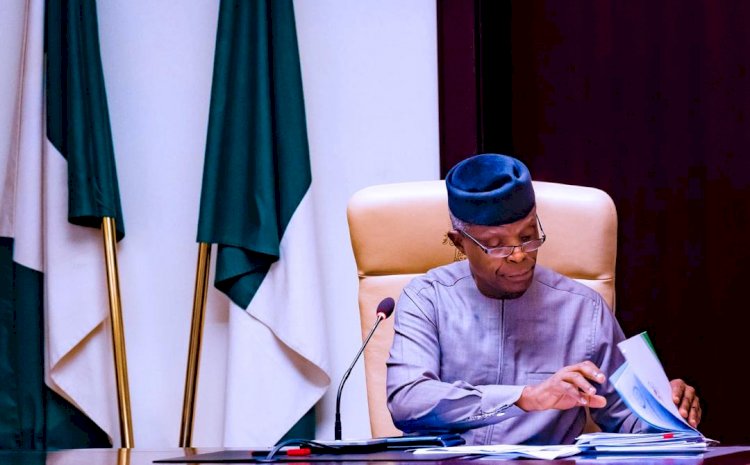 According to a statement issued on Friday by his spokesman, Laolu Akande, the Vice President disclosed this while receiving a United States Government delegation at the Presidential Villa in Abuja.

Professor Osinbajo said at least 13 states in the country including Lagos, have since established Judicial Panels “to seek justice and to compensate those whose rights have been breached.”

The plan of both the Federal and State Governments to investigate police brutality and prosecute erring police officers, create new State-based Security and Human Rights Committees, as well as providing compensation to victims of the disbanded Special Anti-Robbery Squad (SARS) and other police units, would be a game-changer in ensuring an end to impunity, according to Vice President Yemi Osinbajo, SAN.

Prof. Osinbajo stated this on Thursday when he received at the Presidential Villa, Abuja, an American government delegation including the US Assistant Secretary, Bureau for Democracy, Human Rights and Labour, Bob Destro; US Assistant Secretary, Bureau for Conflict Stabilization Operations, Denise Natali; the Counselor of the US Department of State, Thomas Ulrich Brechbuhl; and the Charge d’Affairs, US Embassy, Kathleen FitzGibbon. Foreign Affairs Minister, Geoffrey Onyeama was also at the meeting.

According to the Vice President, at least 13 states in the country including Lagos, have since established Judicial Panels “to seek justice and to compensate those whose rights have been breached.”

The VP also disclosed that the President has already supported the decisions of the National Economic Council.

It would be recalled that on October 12, the Council, which is chaired by the VP with all State Governors and FCT Minister as members, resolved on the immediate establishment of State-based Judicial Panels of Inquiry across the country to receive and investigate complaints of police brutality or related extra-judicial killings to deliver justice for all victims of the dissolved SARS and other police units.

According to Prof. Osinbajo, NEC also agreed on the provision of monetary compensation to victims and prosecution of erring officers.

While responding to the concerns of the US government on instances of impunity in the country, the Vice President noted that these efforts are part of the Nigerian government’s commitment to implement extensive police reforms adding that the establishment of Judicial Panels of Inquiry nationwide will further ensure that the Police and other security agencies ensure the protection of human rights of citizens.

He said, “The concerns around impunity are some of the concerns that informed the establishment of Judicial Panels of Inquiry across states. Each state is now required to establish judicial inquiry that will look into cases of impunity, excessive use of force, extrajudicial killings etc., especially by law enforcement agents.”

“Government is paying attention. The point we are making is that protests are a means to an end, but they cannot be the end. We are very optimistic that what we have put in place would eventually yield the best possible results for us,” Prof. Osinbajo stated.

The VP also highlighted what he termed false narratives about Nigeria, including the herder-farmer crisis, especially in North Central states, and the politics behind the allegations.

According to the VP, the herder-farmer crisis was exacerbated mainly because of land and resources struggle than from the misinterpreted Christians-versus-Muslim narrative.

Members of the United States delegation from Washington DC offered to collaborate with the Federal Government on these issues, a suggestion welcomed by the Vice President hoping that such cooperation will create better understanding of the issues.

Senior Special Assistant to the President on Media & Publicity

Office of the Vice President