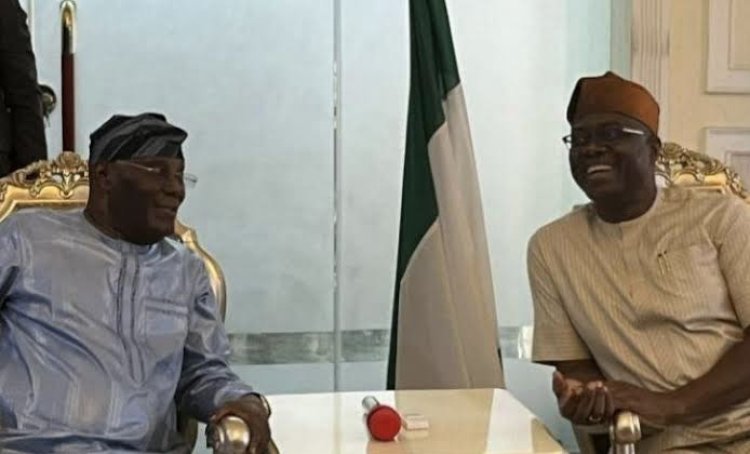 Governor Seyi Makinde of Oyo State has insisted on the resignation of the National Chairman of the Peoples Democratic Party (PDP), Senator Iyorchia Ayu.

Makinde, who belongs to the camp of Governor Nyesom Wike of Rivers, made this call at the South-West PDP stakeholders meeting with the presidential candidate of the party, Alhaji Atiku Abubakar.

In his opening remarks at the meeting, Makinde said, “The truth is that we do not have any issue either with our party or our candidate. If there are challenges they must be tabled. We are supposed to give hope to our people, we want them to listen to us.

“Our party wants to rescue Nigeria and our candidate is a unifier. He wants to restructure Nigeria Eight years of the All Progressives Congress have left us sharply divided. The issue is we must practice what we preach. If we want to unify Nigeria, we must unify the PDP first.

“If we want to restructure Nigeria, we must have the willingness to bring inclusivity to the PDP. Do we have the capacity? The answer is resounding yes. The message from the South-West PDP is the South-West is asking that the National Working Committee of the PDP should be restructured. We are asking the National Chairman to step down so that the South will be fully included. That is the message.”

The PDP entered another round of crisis after the emergence of Atiku as its Presidential candidate in May.

Atiku, who defeated Wike, had settled for Governor Ifeanyi Okowa of Delta as his running mate, against the advice of some stakeholders who recommended Wike.

Hence, the camp of the Rivers governor it was unfair for the chairman of the party and the presidential candidate to come from the north.

They had demanded that Ayu step down, but the PDP chairman fired back, saying those who want him to leave his role were kids when the party was formed.

However, in a move to pacify the Wike camp, Walid Jibrin resigned as the Board of Trustees (BoT) and was replaced by Adeolphus Wabara from the south, but Wike’s camp rejected this and insisted that Ayu must resign.

The National Executive Committee of the PDP had passed a vote of confidence on Ayu, but Wike said the confidence vote would not save the chairman.