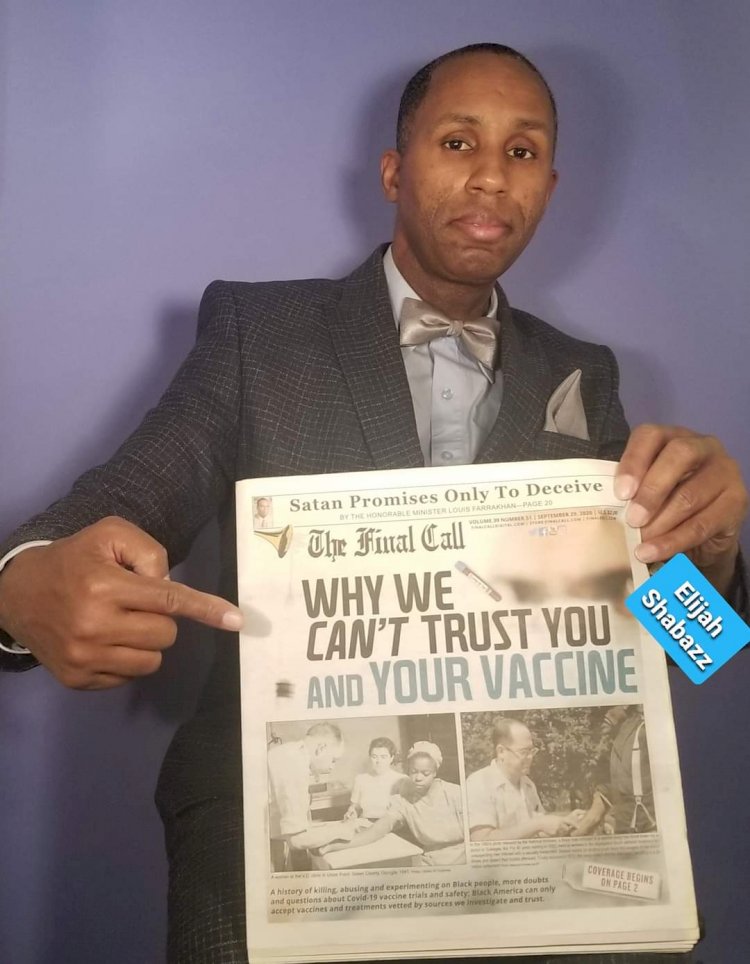 In Fact, over the past decade I have taken two vaccinations/innoculations .

Thus far I have had no side effects from either.

Further, as a Black Muslim I pride myself in the knowledge that a Captive from Africa introduced the science of innoculations to America.

As a Muslim I pride myself in the knowledge that the science of innoculations was introduced to Europe by the Muslims in Turkey.

However, I am opposed to this recent vaccine for many reasons. Without enumerating them all; I will mention three main "common sense" reasons why I personally oppose these new vaccines.

1. It's been Politicized from Day One!!

You don't have to go far back into your memory banks to recall that the outgoing President pressured the Pharmaceutical companies to roll out the vaccine before the end of his Presidency.

He wanted that legacy attached to his name at any and all costs. And when it was "ready" he didn't take it himself.

Obviously he didn't TRUST it either.

Most experts in the field of Vaccine research says that it takes about 5 years to produce an effective vaccine. Many in the medical field believed that it was rushed.

Therefore, as reported in the media, that in some hospitals as high as 80% of the Medical Staff refuse to take the vaccine.

If the ones giving us the vaccinations don't TRUST it..

During the lockdown last year, I stored up some food items. Yesrterday, nearly 10 months later, I noticed a pack of cheese that I had desperately purchased during the lockdown. It was hidden in my fridge behind other groceries.

The Cheese was still in "tip top" shape, showing no signs of natural deterioration that is found in "real food". I threw that thing in the garbage with impunity!!

In fact I fear more of side effect from that mass produced "Genetically " Modified Cheese than I do from my vaccine to Africa!!

The Point that I'm making is that anything "Mass Produced " is bound to be flawed to say the least.

If those numbers represent the dangers of Mass Produced "RUSHED" to the Market Foods.

Then there is no way that I canTrust this RUSH to the Market, Mass Produced Vaccine.

There is a long -well documented History- that  that far exceeds the three simple "common sense" reasons that I have  listed for my Personal distrust.

And May Allah (GOD) Bless us all to make the Right decisions.

IGP: Why Nigerian police officers are seen as the best in the world