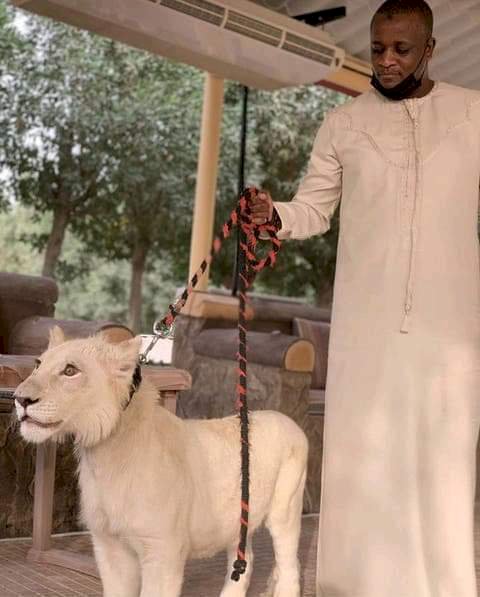 Ahmed Indimi, son-in-law of the President, Major General Muhammadu Buhari (retd), has shared pictures of a white lion on the leash on social media with the caption “my new pet.”

It is not immediately clear if Mr. Indimi is in a petting zoo.

The white lion is a rare color mutation of the lion, specifically the Southern African lion, Wikipedia reports.

“White lions in the area of Timbavati are thought to have been indigenous to the Timbavati region of South Africa for centuries, although the earliest recorded sighting in this region was in 1938,” it says.

According to online portal, Travel & Leisure, only about a dozen white lions exist in the wild today.

“That’s according to the Global White Lion Protection Trust, which was founded by South African conservationist Linda Tucker in 2002 to help protect white lions and reintroduce them into the wild.

“White lions are not albinos,” the portal adds.

White lions occur naturally in South Africa and have been sighted in the Greater Timbavati and southern Kruger Park region.

According to the Global White Lion Protection Trust, the white colouration in white lions is similar to blue eyes in humans, which is also due to a recessive gene.

To show that he’s also a proud owner of a white lion, Indimi flaunted his pet on Instagram in a picture that has him dressed in white to match.

In the comment section, one @amma_licious said, “I really hope it’s a joke because these are endangered animals. Their population is diminishing due to poaching and such acts of keeping as pets.”

One Lilvicky68 on Nairaland forum said, “I wish the lion could take a lovely bite.”

Another member of the forum, Wallade, said, “In a sane country, Animal Control Authority or Animal Rights Group would evacuate the animal from his custody, with or without his consent. No one has the right to keep a wild and very dangerous animal like a lion as a pet. The animal belongs to the zoo or wild.”

“This is a big win for my generation of Africans all over the world” – Burna Boy...