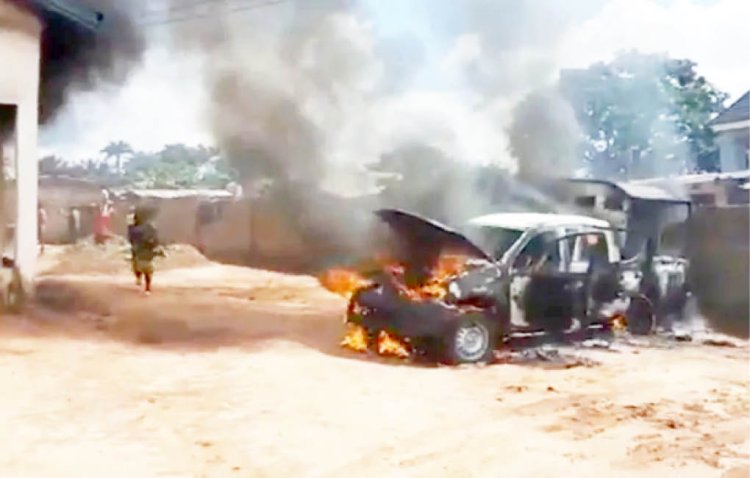 There is palpable tension in Anambra State as a result of the widespread violence recorded recently in the build-up to the November governorship election in the state.

While many people see the killings and attacks witnessed in the state as politically motivated; others believe they are being perpetrated by members of the proscribed Indigenous People of Biafra (IPOB).

The IPOB has been on rampage not just in Anambra State, but across the South East geopolitical zone.

The agitation for an independent state, Biafra, championed by IPOB, has led to killings and destruction in the South East region.

IPOB’s security arm, Eastern Security Network, had been fingered in the killings of security operatives and series of attacks on government institutions, especially police stations and offices of the Independent National Electoral Commission (INEC) across the zone.

Daily Trust reports that few weeks to the November 6 governorship elections in Anambra State, many politicians have gone into hiding as a result of the activities of the rampaging assailants in the state.

All branded political parties vehicles are off the roads and some have removed the branding of their cars.

Also, those driving flashy cars, especially Hilux and Sienna vehicles, face the risk of being attacked and have therefore pulled them off the streets.

The latest of the attacks happened on Friday when a policeman and the driver of a federal lawmaker were killed; while a police station was set on fire.

The armed men attacked the convoy of the lawmaker representing Nnewi North/Nnewi South/Ekwusigo Constituency in the House of Representatives, Chris Emeka Azubogu.

Azubogu, who defected to the ruling All Progressives Congress (APC) from the People’s Democratic Party (PDP) a few days before the incident, was not in the convoy when the assailants struck.

Two days before the attack, seven persons, including, Dr Chike Akunyili, widower of the Late Dr Dora Akunyili, a former Director-General of the National Agency for Food Administration and Drug Control (NAFDAC), were killed in broad daylight in Nkpor in Idemili North Local Government Area of the state.

The dethroned traditional ruler of Mkpunando Aguleri, Alex Edozieuno, had been murdered weeks before the killing of Akunyili.

Edozieuno was killed along Ezu Bridge, Otuocha in Anambra East Local Government Area of the state.

Andy Uba, the governorship candidate of the APC in the state, had, on Saturday, suspended the proposed flag-off of his campaign owing to the killings.

As of yesterday, no political activity was taking place in the state barely 33 days to the gubernatorial election.

The situation has remained so tensed that banners and billboards bearing campaign messages have been pulled down; while branded campaign vehicles are hardly seen in the streets.

Also, the Nigerian Coat of Arms and flags have been removed in some public and government buildings for fear of attack by gunmen.

All Nigerian flags in banks, hotels and other places have been removed in obedience to the IPOB’s directive.

The Police Public Relations Officer in the state, DSP Tochukwu Ikenga, in a statement, said the Commissioner of Police, CP Tony Olofu, had assured residents of the renewed commitment of the command to consolidating on the gains in crime prevention and restoration of law and order in the state.

He reassured on efforts towards improving the safety and security of lives and property of law-abiding citizens in the state.

In the statement, the Commissioner of Police said on September 30, 2021, some yet-to-be-identified heavily armed men stormed the Ajali Divisional Headquarters of the state and fired sporadically at police personnel on duty. He said they were, however, promptly engaged by the police officers and they fled the scene.

He said two police personnel and a civilian sustained gunshot injuries, while a patrol vehicle was burnt and the police station was partly touched.

A joint team of police and military personnel trailed the fleeing attackers and intercepted them along Oko Ajali road before though they escaped with gunshot injuries. The operatives recovered a Highlander jeep and two motorcycles.

He called on citizens in the state to be calm, patriotic and go about their lawful businesses as the police, the military and other security agencies are already rejigging strategies to contain the situation and prevent any further threats to lives and property in the state.

He vowed that the perpetrators of the dastardly acts would not go unpunished.

However, Anambra State Governor Willie Obiano has placed a N20 million bounty on killers of Dr Chike Akunyili, and others killed in the state by hoodlums.

He said: “To reinforce our commitment and seriousness on this issue, I on behalf of the state government, wish to announce a N20,000,000 reward for any useful information leading to the arrest of the perpetrators of these heinous attacks on our state. The people behind this must be unmasked and brought to book.”

He urged citizens to report to security or vigilante personnel, “so we can deal with this monster, once and for all.”

Obiano warned “all those promoting and participating in the violent attacks to leave our state or pay a high price as we will definitely catch up with them.”

He directed “all security agencies to step up and confront this monster ravaging the land.”

“I have charged everyone involved in the security architecture of Anambra State to take very seriously, this threat to our livelihood and boldly rise to confront same,” he said.

He also urged traditional rulers, presidents general, clergymen, vigilante groups and all leadership structures to take responsibility in conjunction with the police, military and other law enforcement agencies and work to restore order without delay.

In a fresh attack Sunday, suspected IPOB militants attacked the offices of the Department of State Services (DSS) and the Federal Road Safety Corps (FRSC) in Nnewi, Anambra State.

While a source said two passersby were killed, another source said nobody was killed during the attacks on the DSS and FRSC.

The gunmen, according to eyewitnesses, drove from Owerri Road in four Sports Utility Vehicles (SUVs), stopped at Emecourt Road Junction where they fired some gunshots, which made passersby scamper for safety, before they headed to the offices.

Daily Trust gathered that they later drove through Nkwo Triangle Roundabout and moved towards Nnobi Road.

The sources also said a military armoured vehicle later surfaced and drove round town passing through Emecourt Road, but there was no exchange of fire as the military did not meet the gunmen.

The State Police Command’s spokesperson, DSP Tochukwu Ikenga, confirmed that there was an incident in Nnewi, but refused to state the offices involved.

He said: “At about 2pm, of 3rd October 2021, the command received a distress call of a fire incident in Nnewi. The police operatives are currently on ground and the area has since been cordoned off. Further details shall be communicated,” he said.

Banditry: These Aren't Just Bandits , They Are Terrorists — Niger Gov

American Academic Wants US To Designate IPOB As Terrorist Organisation