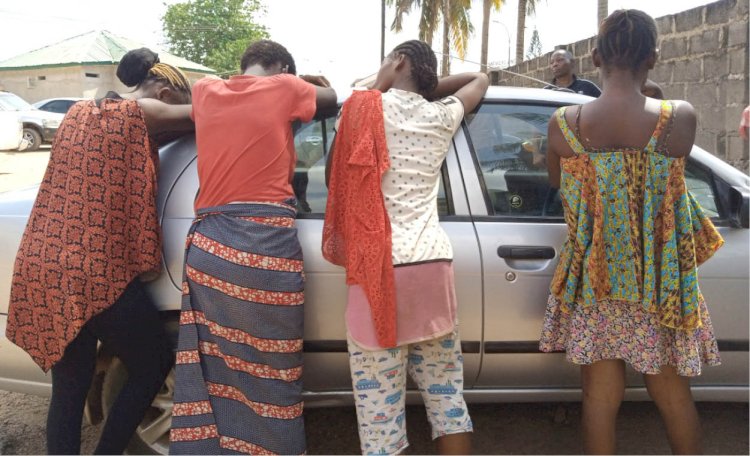 or the second time in a year, operatives of the Ogun Police Command busted a baby-making factory and freed about ten inmates. This report captures the captives’ tale of woes.

Bessing Igwe, a 15-year-old primary school dropout, got pregnant while hawking eggs in the streets of Okigwe in Imo State. A ‘helper’ had come her way and offered to help take care of the baby upon delivery in order to allow the teen expectant mother return to school.

What sort of help and how? Blessing, beclouded by her poor status, perhaps, failed to probe the rationale behind the offer of help.

The teenager, in August, landed in a baby-making factory at Ofada area of Mowe, Ogun State. She was not alone, as the alleged operator – Mrs Florence Ogbonna, had harvested young girls from Imo, Abia, Ebonyi and other states in the South East. She allegedly lured them with job opportunities, and later introduced them into the illicit trade.

“The woman told me if I give birth, she’ll send me back to school and then take care of my baby. I called my family once and they scolded me on phone because I left home without telling them,” Blessing narrated.

She was one of the four pregnant mothers rescued on Tuesday by the police. The police had arrested the alleged operator of the factory on February 28, she was charged to court and granted bail.

Girls and women in various phases of pregnancy.

The alleged operator of the home, who lure young women into the home, usually contract the services of able-bodied men to impregnate them. Immediately any of them gives birth, she would put the baby up for sale.

What happens to babies from the factory?

The question nobody could answer in a hurry is: what happens to the babies sold from the factory?

The spokesman of the Ogun Police Command, Abimbola Oyeyemi, told newsmen that the alleged operator of the baby-making factory has been arraigned in court for human trafficking, but upon being granted bail, she returned to the “normal business.”

During the rescue operation, 10 captives including pregnant mothers and kids were freed. Mrs Ogbonna reportedly fled, but her daughter and a physically challenged man were arrested. The man was allegedly responsible for impregnating the young girls.

Oyeyemi said the command had launched a manhunt for the woman with a view to bringing her to justice.

According to him, one of the victims who resisted the plan to put her baby up for sale, escaped and reported the illicit trade to the police.

The police publicist said families of the victims will be contacted in order to reunite them.

“This is a case of a baby factory recently discovered at Ofada area of Mowe, surprisingly the operator of the home has earlier been paraded and charged to court by the operative of Ogun State but granted bail. Having been granted bail, she went back to her normal duty.

“One of the victims escaped because they wanted to sell her baby, she disagreed with them and went to the police to report. The Ofada police were deployed and on getting there, they succeeded in arresting some of the victims.

“We met about 10 girls there, some of them were already pregnant and we have the daughter of the operator alongside a man who we strongly suspect to be one of those the woman hires to impregnate the ladies,” he said.

The police publicist added “It is not too good for us (parents) to leave children to be on their own, it will always result in something so serious like this and I believe with what we are experiencing now, parents will know that leaving their children uncared for is usually catastrophic.”

He noted that with quick dispensation of justice, such criminal activities would be reduced in the society.

Speaking with newsmen, one of the victims, Chindera Onuoha, said she reported to the police after the fleeing woman wanted to sell her baby.

“They wanted to take my baby but I refused. She (the operator) said she has spent so much on me and she needs to make the money back. And the only way is to sell my baby to recover the money she has spent on me,” Onuoha said.

However, few hours after the police made public its breakthrough, the state government disclosed that it had begun a man hunt for the five children that escaped from the Stella Obasanjo Motherless Children’s Home in Abeokuta, the state capital.

The children allegedly escaped from the Stella Obasanjo Motherless Children’s Home which is owned by the state government on Thursday night.

What the authorities do?

The government expressed shock over the missing children, saying it had reported the case to the state police command and other security agencies in the state.

The government made the disclosure in a statement issued by the Commissioner for Information, Abdulwaheed Odusile, in Abeokuta.

Odusile said “It is also noteworthy to say that the children do not have free access to go out of the premises as there is no such thoroughfare. They are strictly monitored. So, it was shocking and most surprising that they found their way out of the premises.

“As such, the state government has taken steps to bring them back into the home as the matter was promptly reported to the police and all those on duty on the night of the incident were promptly queried,” Odusile said.

He explained that the state government was on top of the situation as the department in charge of the Home has reported the matter to the police.

According to him, the government has also sent signals to all required quarters in order to establish the truth behind the saga, adding that the government of Dapo Abiodun would not in any way condone any injustice, especially when it concerns the welfare of children in Ogun State.

Odusile said: “We are very much in touch with all the agencies of the government concerned. We are conducting our own investigations to establish the facts. We want the public to be rest assured that we shall leave no stone unturned to unravel the truth.

“Ogun State is a no-go-area for criminal minded individuals. If it is established that some of our staff were involved in any shady deal, they would be promptly brought to book. We live in a society where we allow the law to take its course,” he said.