Ebonyi Will Not Belong To Biafra – Umahi 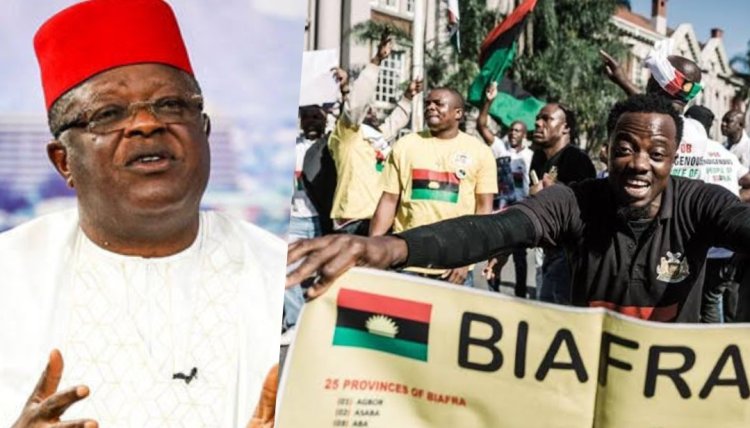 The outlawed group, which has been blamed for the rising violence in the South East, has been agitating for secession.

The group has also declared weekly “sit-at-home” exercise in solidarity with Nnamdi Kanu, its leader, who is currently in lawful custody.

Commenting on the worrisome trend in an interview with some editors, Umahi said, “I use this opportunity to tell Igbo to be wise, this sit at home is useless and it is nonsense. This agitation is nonsense for me because even if it was to be Biafra, Ebonyi will not belong to Biafra.

“I have been saying it and I will continue to say it and I have no apologies because we have been used as house boys and house girls and by the creation of Ebonyi State, we are having self-determination and somebody telling me about Biafra. We have to get to the status of our brothers and sisters in South East. Before, we have no confidence in ourselves and we are changing the narratives and somebody has been your house boy and house girl and the person wants to aspire, you will definitely not be happy.

“So, we are not for Biafra, we are for a united and equitable just Nigeria. And so, I will continue to preach that there is no gain in sit at home, there is no gain in our killing ourselves and I am happy that the altercation with other people from other region is a thing of the past. We are living peacefully with our brothers and sisters from other regions and it is quite encouraging. But in sit at home, I support not it at all and I call on our people to come out in sincerity and fear of God, let us work together to do something about our region and liberate our people.”

Asked why is difficult for the five Governors of South East to work together and function very effectively on security issues, especially on Ebubeagu, an outfie established to strengthen security in the zone, Umahi said, “The issue of Ebubeagu, you see, every state is autonomous and I won’t be able to comment on it because South East leaders came together and said look, by December last year, every state should have Ebubeagu inaugurated and I know that some states has had their own laws. We first made and signed our laws and it is working and it is helping us and that is the way to go and I can’t speak for other states because may be, they have a better way of solving their security problems but this is my own little way of solving it and it is working for me.”