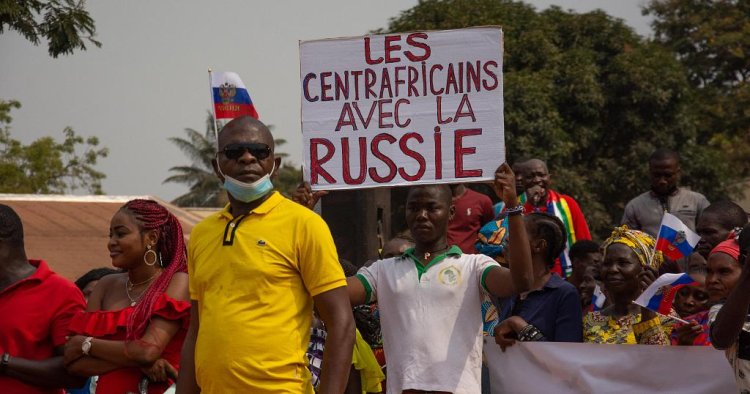 Citizens of the Central African Republic (CAR) have on Saturday thronged the streets of Bangui, the nations Capital to rally in support of Russia amidst sanctions from western allies following the Ukraine invasion.

CAR is one of the African countries which signed latter day agreements with Moscow to help fight insurgents in the region; an agreement the EU and France have both condemned.

Whilst the popularity of France declined in the country, Russia has grown popular to the extent of CAR authorities building a statue in honor of the Russian troops for supposedly fighting insurgents within few weeks of operation. The said statue displays Russian soldiers protecting a woman and her children.

With pro-Russia inscriptions on the placards, the protesters declared their full support for Moscow whilst condemning NATO.

Brice Plegba, one of the participants said, “we have come to support Russia, which has come to bring peace to our country,”

“We are here to give our unwavering support to Russia in this war. I think it was imposed by the West on Russia […] Nato wanted to install its military base in Ukraine to attack Russia,” Blaise-Didacien Kossimatchi, one of the organizers of the protest said.

I Watched As Six Of My Siblings Were Killed’, Turji Defends Cause

All Of Humanity’ At Risk From Nuclear Threat Over Ukraine, Says UN