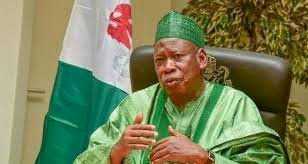 The Governor of Kano State, Abdullahi Ganduje, said on Thursday that he would not waste time to sign the death warrant on a Kano-based singer, Yahaya Sharif, who was sentenced to death by an Upper Shariah Court for blasphemy.

Ganduje made the remark at a stakeholders meeting on the issue at the Government House, Kano.
He said, “Kano State Government has accepted the judgement passed by the Sharia Court and it has also accepted the provision of the Constitution of the Federal Republic of Nigeria.”
Ganduje noted that the convict had a 30-day grace to appeal the judgement, adding that if by the end of the 30 days the convict had not appealed, he would not waste time to sign the execution order.

“In the event the convict appeals the judgement, we shall wait and follow the case up to the Appeal Court. If he further appeals to the Supreme Court, we shall follow the case there. If the Supreme Court upholds the two lower court judgements, the governor of Kano State will not add one minute to sign the execution order,” he said.
Ganduje lamented that the issue of blasphemy was taking its toll in recent times, stressing that the government would not rest on its ores until it contain the situation.

He commended the ulamas for their commitment to ensure the culprit was punished accordingly.

He also commended security agencies for being up and doing to avert possible breach of the peace or break down of law and order during the height of the issue.

9 houses, factories and facilities belonging to Aziz were connected to electricity...