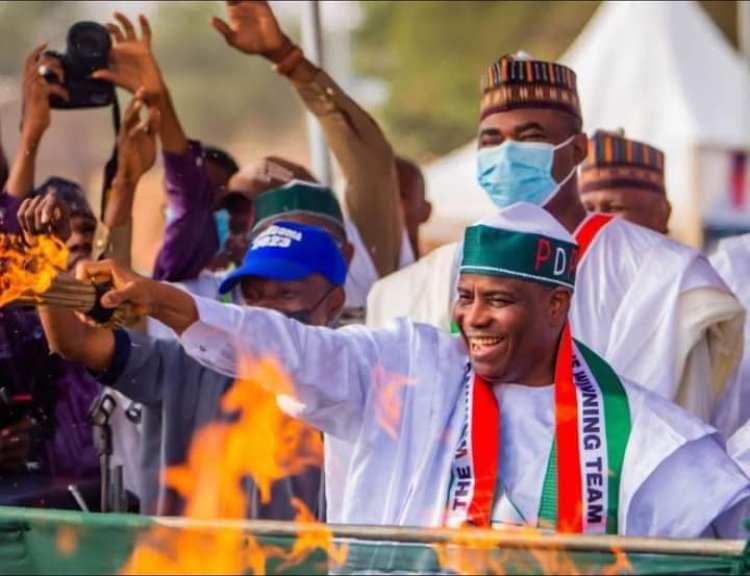 Governor Aminu Tambuwal of Sokoto State says the Presidential Candidate of the Peoples Democratic Party, PDP, Atiku Abubakar, is the only falgbearer that can change Nigeria’s political fortune positively.

Mr Tambuwal, the Director-General of the PDP Presidential Campaign Council, made the assertion at the party’s campaign rally in Binji and Tangaza Local Government Areas of the state on Tuesday.

According to him, Mr Abubakar has designed workable strategies to end banditry, fight corruption, unemployment, address infrastructural decay and boost the socioeconomic life of Nigerians, among other issues.

“Therefore, we should all give our votes for PDP candidates from the President to the State House of Assembly in order to benefit the best Nigeria of our dreams.

“We should safeguard our Permanent Voter Cards and avoid any person who would use money to buy our votes for the best of our country’s future,” he said.

The governor further urged the gathering to maintain their dignity, adding that they should not, in any way, allow themselves to be used to compromise peaceful coexistence at the expense of violence and chaos.

Mr Tambuwal warned youths against thuggery, saying: “You should ask any politician who invite you into political thuggery to align you with his sons and daughters.”

The state PDP Chairman, Bello Goronyo, thanked the people of the areas for their sustained support to the party.

Mr Bello received some prominent members of other political parties who, according to them, saw reason to defect to the PDP alongside their followers.

The chairman appreciated the wise decision of the new entrants, describing them as partners in progress.

On his part, the PDP Gubernatorial Candidate, Sa’idu Umar, pledged to maintain the legacy and dynamic style of Tambuwal, if elected.

The Director-General of the campaign council in the state and former minister, Yusuf Sulaiman, assured that the door of PDP is open for all new entrants.

Mr Sulaiman urged PDP supporters to put more effort in convincing the people of the state toward the success of the party and sustain door-to- door campaign in their respective areas.