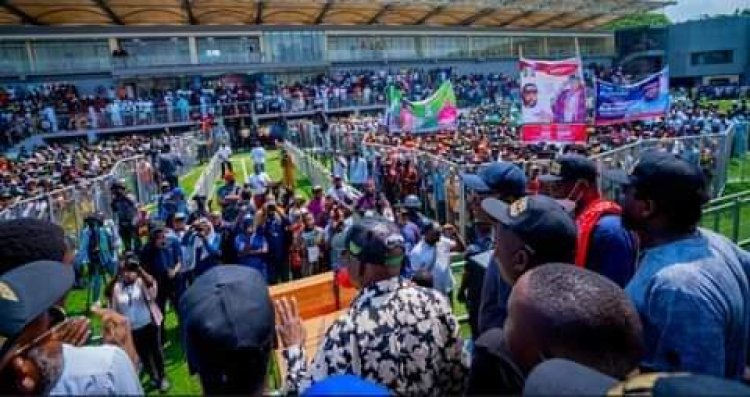 The National Leader of All Progressives Congress, APC and Presidential hopeful in the 2023 poll, Bola Tinubu, on Saturday, said Nigerians were tired of excuses and lamentations over perennial insecurity and socio-economic challenges in Nigeria, saying a united and insecurity free Nigeria is possible.

The former Lagos State Governor, Tinubu, spoke at a grand rally by youths under the aegis of Progressive Youth of South-West to declare their support for his presidential aspiration at the Mobolaji Johnson Arena, Onikan, Lagos Island area of the state.

The youth from different states in the South West region, such as: Lagos, Ogun, Osun, Ekiti, Ondo and Oyo states converged on Lagos in their large numbers to drum up support for the aspiration of Tinubu in his quest for Presidency on 2023.

Tinubu, while addressing the teeming youths that filled the arena, which he described as the brightest, brilliant, urged them to team up with him in his bid to change the story of Nigeria for the youths and tomorrow which they represent.

We as a nation can conveniently feed ourselves by being creative, visionary and committed, anybody who says we cannot, they can get out because it is voluntary. We cannot continue the lamentation of the past, we cannot continue with excuses of power failure, no nation that made rapid development without electricity , give us light and if we cannot be successful then you can abuse us , you cannot give us erratic light that is undependable and then blame us again that we are lazy .

‘’Nigeria it is about time, we have enough gas to fire up electricity and supply the rest of Europe and make money, long term from it. You know it. We don’t want to bore you with it, when i started we used to pick dead bodies on the streets, but today Lagos is one of the cleanest, most progressive states in the country.’’

He therefore, urged the youths to revalidate their Permanent Voter’s Card PVC and be ready to vote in the forthcoming 2023 general elections.

Also speaking, Lagos State Governor, Babajide Sanwo-Olu, who appreciated the grand support for Tinubu, noted that youths will continue to be identified as critical stakeholders, just as he urged all delegates to the APC Primary to exercise their franchise wisely.

The South- West youth leaders at the event took their turns to speak on why the youth were promoting Tinubu to become the next president of Nigeria, come 2023.

Speaking, Dr. Muritala Seriki, Dayo Israel, Muhammed Sulaiman, among others applauded the achievements of Tinubu in infrastructure, education, and in raising the Internally Generated Revenue (IGR) of Lagos, while he was governor of the state, saying some of them were his products having brought them to the level they had attained presently.

They described Tinubu as a detribalized Nigeria, who would take the country to greater heights, come 2023 if voted as president of the country.

Seriki, in his speech, itemised the achievements of the former State governor to include: “increase in the State’s Intetnaly Generated Revenue, IGR, that brought about growth and development in all sectors of the economy, describing him as a detribalized Nigerian who would replicate his achievements in Lagos at the national level if elected the country’s next president.

Israel, who also spoke in the same vein, charged the youth to go for their PVC and be prepared to vote in the coming general elections, saying that they should be prepared to speak with their votes by electing Tinubu as next president of the country.

According to Sulaimon, who also paid tributes to the APC national leader’s leadership quality as well as his closeness to the youth, assured that all the youths in the North-Central were behind realization of Tinubu’s Presidential bid in 2023, even as he prayed for him for the fulfilment of the dream.

The support for Tinubu’s presidential election was not limited to the youth as South-West State Assemblies also expressed support at the event.

A member of Lagos State House of Assembly, Desmond Elliot, representing Surulere Constituency 1, in his short remark, said the state Assemblies in the zone were unanimous in their support for Tinubu’s presidential ambition.