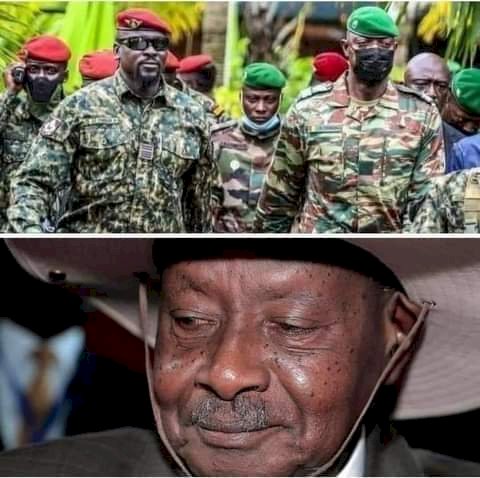 Guinea Military Leader: We respect you as ECOWAS but we will not take your orders. Don't assume powers you don't have...Guinea is an independent nation, t's not your family business where you will go around dictating.

The Army removed a dictator who changed our constitution to remain in power; the people are up to now celebrating his downfall, why do you want us to restore his Government yet people are against him, go on the streets of Conakry and talk to people and you will know their position..

Please stop dictating don't lecture us on democracy. ECOWAS and AU are a batch of dictators with mentality of occupying and colonizing Africans. Dictators think they will rule African countries as if they are running their families.

We are closely following the events and we have learnt that Museveni hasn't slept ever since we took over power. He has been calling fellow dictators to undermine our leadership

Museveni should instead focus on his country and rebuild it since he destroyed it long ago to the extent that there is no constitutional order in Uganda. Museveni is the constitution in Uganda and he is still protected by AU a batch of tyrants on our Continent.

Museveni family rule in Uganda, he dominates everything and Ugandans have suffered under his hands.

Dictator Museveni who is writing missives against us accusing us of being backed by western powers, but he himself is the real agent of the western powers...He was used to gather Intelligence on Omar Al Bashir, he was used by the west to spy on Gadaffi..and he is still doing more for the west..

If he Museveni is working for the west, he is the kind of puppet leaders who don't know his place in history, and is responsible for the death of Thomas Sankara and Patrice Lumumba, Museveni is a traitr to the new African order...If he continue his outbursts against us, we have more capabilities to undermine him on the African continent and beyond including ending his tyrannical miss rule in Uganda.

For Museveni and his fellow African dictators at AU, Please stop interfering in the affairs of Guinea, stop lecturing us on democracy, stop your colonial mentality, concentrate on fighting poverty in your countries and serving our people well on this Continent, they are suffering. Museveni you have tainted your legacy and you have destroyed all your achievements and credibility.

Good leaders must learn to serve, and retire peacefully.

Museveni is 41 years in power, from 1980 to date..
And a key Executive role player in the AU, what an insult to Africans...?
By Wal Ikram
NewsWire, Guinee