You Have Made Us Proud – Bello, Obaseki Congratulate Amusan On Historic Gold Win 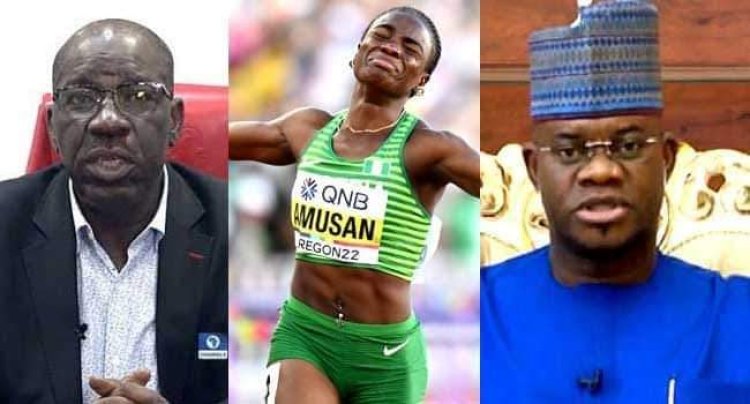 On Sunday, Amusan became the first Nigerian athlete to win a World Athletics Championship gold as she blazed to victory in the women’s 100m hurdles in Eugene, Oregon, USA.

Amusan, who had smashed the world record in the semi-final where she clocked 12.12 seconds, powered over the line at Hayward Field in an incredible 12.06 seconds.

Governor Bello in a statement on Monday by his Chief Press Secretary, Muhammed Onogwu, said the athlete’s excellent display has united the nation, bringing joy and excitement.

Amusan’s triumph, the governor stated, “would be an unforgettable memory and her tears of joy, represented hope, belief and faith in oneself and one’s nation despite facing daunting challenges both individually and as a nation.”

He called for the need to further encourage Nigeria’s “sporting heroes, across all levels that not only adorn our colours at every competitive stage but also go through several hurdles, rigorous training and challenges to ensure that the nation’s flag is raised in pride and honour.”

On his part, Governor Obaseki hailed Amusan for the stunning, rousing and inspirational performance at the global tournament and for showcasing the indomitable Nigerian spirit to the rest of the world.

“I heartily congratulate our track superstar, Tobi Amusan, on her enviable feat at the World Athletics Championship 2022, clinching gold at the global tournament and setting a new world record in the semifinals of the competition to become the first Nigerian to win a World Championship,” the governor was quoted as saying in a statement by his spokesman, Crusoe Osagie.

“A worthy ambassador of the country, Amusan, a two-time African Games champion, has continued to blaze the trail, putting the nation on the global map for good.

“Her wizardry performance at the global competition, at the weekend, was a classic display of the dogged and indomitable Nigerian spirit. We are proud of her exploits and are even more confident that she will bring more glory to the country.”

Noting that the victory is an excellent inspiration to Nigerian youths to toe the path of hard work, Obaseki said his administration will sustain investment in the sports sector to create more opportunities for Edo youths.

Earlier, President Muhammadu Buhari celebrated the 25-year-old for setting a new world record in the semi-finals of the athletic event and for becoming the first Nigerian to win a world championship.

Peter Obi To Supporters : Allow Me Respond To Any Presidential Candidate Who Talks...