Father Matthew Kukah, Catholic Bishop of Sokoto Diocese, has described as false, the reports that an angry mob burnt down his Sokoto residence on... 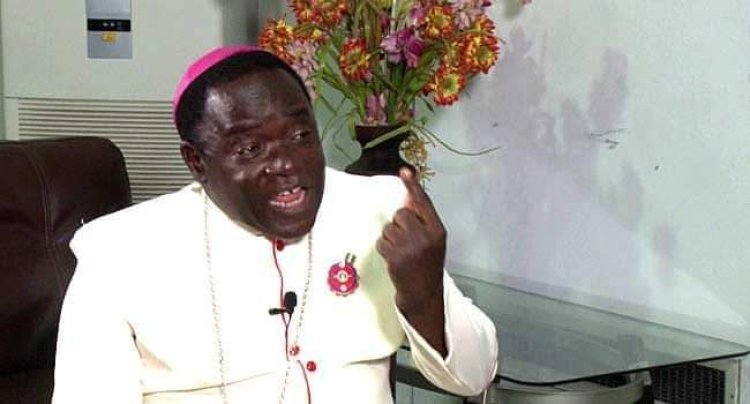 There has been tension in the state since the killing of Deborah Samuel, a 200-level student of Shehu Shagari College of Education, Sokoto, over alleged blasphemy.

The police had arrested two persons in connection with the incident. But on Saturday, protesters trooped to the streets to demand their immediate release.

As the protest was spiraling out of control, Governor Aminu Tambuwal declared a 24-hour curfew.

However, many social media posts said Christians had been attacked while churches had been burnt down.

There were also rumours that Kukah’s residence had been set on fire.

But in a statement signed by Reverent Father Christopher A. Omotasho, Director of the Directorate of Social Communication of the Diocese, said “contrary to information in circulation, we wish to disclaim that there was an attack of any sort on the residence of Bishop Matthew Hassan Kukah.”

The statement noted with dismay that, during the protest, groups of youths led by some adults in the background attacked the Holy Family Catholic Cathedral at Bello Way, destroying church glass windows, those of the Bishop Lawton Secretariat and vandalized a community bus parked within the premises.
“St. Kevin’s Catholic Church Gidan Dere, Eastern By-pass, was also attacked and partly burnt; windows or
the new hospital complex under construction, in the same premises were shattered.
“The hoodlums also attacked the Bakhita Centre located along Aliyu Jodi Road and burnt down a bus within the premises but they were promptly dispersed by a team of Mobile Policemen before they could do further damage,” the statement added.
Bishop Kukah however, commended Governor  Aminu Tambuwal for acting promptly by declaring the 24-hour curfew to stem the protests.
He also commended the security forces for promptly rising to the occasion to prevent further damage at our facilities.
He further appealed to Christians to remain law abiding and pray for the return of normalcy, just as he suspended all masses until the curfew was lifted.
President Muhammadu Buhari had condemned the killing of the student and ordered a probe of the incident.

“No person has the right to take the law in his or her own hands in this country. Violence has and never will solve any problem,” Buhari had said.

He also directed the Ministries of Information and Culture, Police Affairs, Communications and Digital Economy to collaborate with GSM providers and Tech companies in order to contain the spread of false and inflammatory information through social media.

He also commended the immediate response to the incident by the Sokoto State Government, and urged religious and community leaders to call citizens’ attention to the need to exercise the right to freedom of speech responsibly.

Tambuwal had earlier met with both Christian and Muslim religious leaders and appealed to them to douse tension.