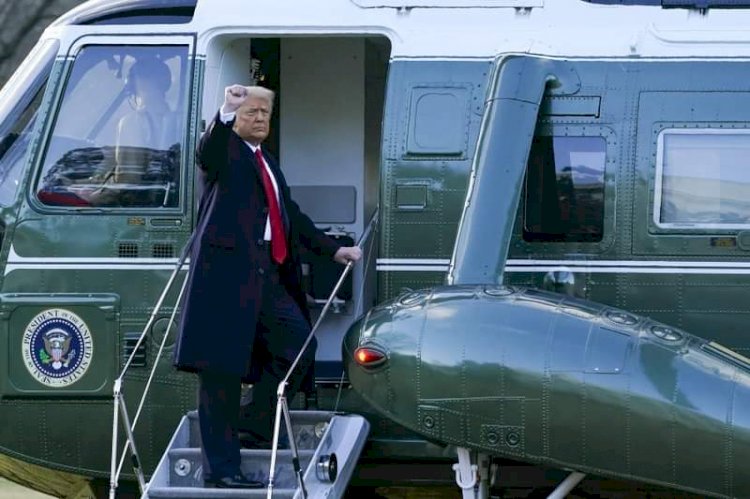 Trump took off from the lawn of the White House in company with his wife, Melania.

The helicopter which conveyed the President took him around the premises of the White House to give him a final view before arriving at Joint Base Andrews.

The event took place ahead of the inauguration of incoming President Joe Biden and incoming Vice President Kamala Harris.

Biden who defeated Trump at the US presidential election of November 3, 2020, will be sworn in today at 17:00 GMT.

The event will not be attended by Trump who continues to maintain his claim that the election was stolen from him.

The inauguration will, however, be graced by the outgoing Vice President Mike Pence, Senate Majority leader Mitch McConnell and other GOP leaders.

"We will be back in some form," Trump told a modest crowd of supporters who gathered to see him off at Joint Base Andrews. "So have a good life. We will see you soon."

According to CNN, Air Force One lifted off for a final time with Trump aboard, Frank Sinatra's "My Way" blared in the background.

He departed a city under militarised fortification meant to prevent a repeat of the riot he incited earlier this month. He leaves office with more than 400,000 Americans dead from a virus he chose to downplay or ignore.

For his opponents, Trump's departure amounts to a blissful lifting of a four-year pall on American life and the end to a tortured stretch of misconduct and indignities. Even many of Trump's onetime supporters are sighing with relief that the White House, and the psychology of its occupant, may no longer rest at the center of the national conversation.

At least some of the 74 million Americans who voted for Trump in November are sad to see him go. Scores of them attempted an insurrection at the US Capitol this month to prevent it from happening at all. The less violent view him as a transformative President whose arrival heralded an end to political correctness and whose exit marks a return to special treatment for immigrants, gays and minorities.

He emerged for a final time on Wednesday, discarding tradition and boycotting his successor's inauguration. Aides said he did not like the thought of leaving Washington an ex-president, nor did he relish the thought of requesting use of the presidential aircraft from Biden.

The ceremony was modest in scope, though it did include a red carpet, cordons of troops and a 21-gun salute. Before departing the White House, he offered a wave from his Marine One helicopter.

In a subdued, discursive speech on a windy tarmac, Trump made glancing references to his accomplishments in office but seemed bitter at his loss.

"I hope they don't raise your taxes, but if they do, I told you so," he said.

“Each political crisis in Bamako results in an overflow...