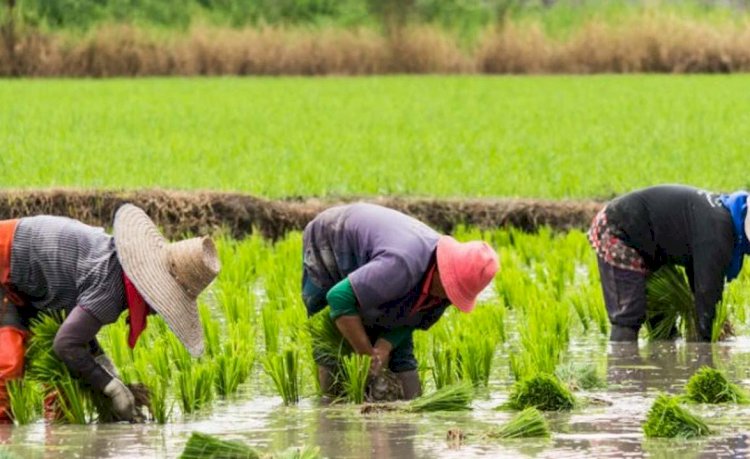 Rice has become a staple food in Nigeria, Africa’s most populated country, making the industry a priority for governments wanting to improve their track record.

tweeted in February 2019 that “12 million jobs have been created in the rice production industry”.

For this reason only, she said, Nigerians would elect Buhari “again and again and again”, suggesting the jobs were created by his government. (Note: Buhari has since been re-elected.)

Africa Check has previously fact-checked a claim by Onochie about Buhari’s achievements in putting kids back in school and found it inaccurate.

Does this one check out?

Source of the data

Africa Check has repeatedly tried to contact Onochie for the source of her data, but she is yet to respond. We will update this report if she does.

Twitter users have also asked for her evidence of the claim.

What is a job?

The National Bureau of Statistics defines having a job as

being in employment . An employed person is engaged in the production of goods and services, contributing to gross domestic product in a legitimate manner and receiving compensation for the activity.

People who are willing and able to work – members of the labour force – but do not, or work fewer than 20 hours a week, are considered unemployed.

People who work at least 20 hours but less than 40 hours a week, or work in an activity that underutilises their skills, time or educational qualifications, are categorised as

Half Nigeria’s workers employed in agriculture

The bureau does not have data on employment in rice production, Leo Sanni, its statistical information officer, told Africa Check.

It does have general data on employment in agriculture. In the third quarter of 2017, about 77.55 million Nigerians were engaged in some form of economic activity. Of these, nearly half (48.19%) were doing agricultural work, according to the 2017 third quarter labour force statistics report – the most recent.

The Rice Farmers Association of Nigeria claims more than 12 million members in rice production, from farming to milling, marketing and research.

It says its focus is to help meet Nigeria’s demand for rice, which it estimates at 5 million tonnes a year.

The group’s members have grown from 7 million before Buhari took office to 12.2 million “or even more”, Aminu Muhammad, its president, told Africa Check.

He attributed the growth to the success of the administration’s agricultural policies. But he didn’t say how those numbers were arrived at, or if they were equivalent to jobs.

Claim ‘possible’ but ‘difficult to check’

The claim was possible but difficult to check, Dr Wale Oni, an agricultural economist, told Africa Check. This is because rice production is largely informal and its jobs seasonal.

Incentives such as the Anchors Borrowers’ Programme , which helps small farmers grow more rice, and concessional lending had been beneficial, Oni said.

“But the claim is hard to verify. We must be provided with a methodology as to the figure was arrived at.”

Dr Festus Awoyelu, an agricultural economist at the University of Nigeria Nsukka , also said the jobs claim was possible.

“Twelve million jobs so created could be full-time jobs and not seasonal as some believe. Rice production has many parts and [thus] enough all-year-round activities.”

But independently verifying the number would require a state-by-state count of rice farmers and related jobs. Not all states keep this data, Awoyelu said.

Conclusion: Difficult to verify that Buhari has created 12 million jobs in rice production

But she didn’t give the source of her claim. The country’s statistics office doesn’t keep data on jobs in rice production.

The industry’s largest grouping said its members had increased from 7 million before Buhari took office to 12.2 million in 2018.

Two agricultural economists said the jobs claim was possible, but the numbers difficult to verify because there wasn’t enough data available.

We therefore rate the claim as unproven.

Read the original story, with links and other resources.

Africa Check is a non-partisan organisation which promotes accuracy in public debate and in the media. Twitter

The extraordinary story of a fouta of the fouta djaló deported to the USA. He is...