The governors said innocent herders should not be vilified while those found wanting should be handed over to the law enforcement agencies.... 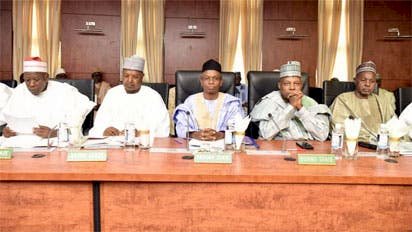 The Northern Governors Forum (NEF) has called for the stoppage of attacks on innocent Fulani herders in South-East, South-West and South-South states.

The governors said innocent herders should not be vilified while those found wanting should be handed over to the law enforcement agencies.

But governors in the South West, while responding to the call, said there was the need for authorities in Northern Nigeria to call “killer herdsmen” to order.

Daily Trust reports there is tension occasioned by the blame game between herders and residents in many states in the South with attendant deaths and destructions.

While people in the South accused herders of atrocities, some Fulani leaders living in the region said not all of them are criminals.

Herders’ settlements have been torched in Oyo, Ondo, Ogun and Edo States, and there is heightened tension in Abia, a development that prompted some prominent personalities and groups to call on President Muhammadu Buhari to act fast.

An elder statesman, Alhaji Bashir Tofa, had three days ago called on the president to wade into the matter to avert reprisal against people of Southern extraction living in the North.

It was about the same time when the Northern Elders Forum, through its spokesman, Dr Hakeem Baba-Ahmed, made a similar call. On Wednesday, Speaker of the House of Representatives, Femi Gbajabiamila, said it was wrong for one part of the country to lord it over another.

What the Northern governors said

The Chairman of the Northern Governor Forum and governor of Plateau State, Simon Bako Lalong, frowned at recent events in the South, saying they were against the peace move by the Nigerian Governors Forum ((NGF).

He recalled in a statement on Thursday the intervention of the NGF led by its Chairman, Governor Kayode Fayemi, who met with stakeholders in Akure, Ondo State to calm the tension and forge an amicable resolution of the issues was commendable.

“While such intervention was celebrated as a success to be sustained through further engagement between herdsmen and representatives of affected communities, emerging reports of attacks on herders and the gradual introduction of ethnic sentiments in the conflict is disturbing and should immediately be nipped in the bud before it gets out of hand.

“The Northern Governors Forum concedes to the rights of Nigerians to reside wherever they so desire without any molestation or discrimination.

“The criminal elements should not be used to tar any particular ethnic group for any crime as that will portend danger to peaceful coexistence and national unity.

“Rather, such criminal elements should be exposed, isolated and made to face the law of the land without prejudice to their ethnic backgrounds as the motives or criminal actions cannot be said to be the position of their ethnic group.

“In the face of the recent worrisome developments, therefore, the Northern Governors Forum calls for calm and cautions Nigerians particularly those in the affected areas who might have been aggrieved or targeted to exercise restraint,” the statement said.

Lalong said the country was already going through a lot, and that escalating tensions would aggravate the situation to levels that could threaten national security.

Lalong called on leaders across political, ethnic, religious and community lines to avoid utterances and actions that would further fan the embers of distrust, hate, violence and retaliation which can easily escalate the situation and cause chaos.

He equally called on government officials, traditional rulers and opinion moulders to also “rise and speak with one voice by not only condemning crime no matter who is involved but also sending the right signals to those who want to take the laws into their hands and trample on the Nigerian Constitution by attempting to deny others the rights to live and pursue their legitimate business in whatever place they choose to reside.

“Security agencies must also be firm and rise to the occasion by protecting all law-abiding citizens against the threat to their lives and properties irrespective of their ethnic or other affiliations.

“They should also send a clear and unambiguous message to those threatening the peace that they will act decisively to stop them from plunging the nation to anarchy.

“The Northern Governors Forum further assures Nigerians of all ethnic, religious and political persuasions of their constitutional rights to pursue their legitimate businesses wherever they choose within the region and appeal to the people to resist any attempt to lure them into any activity that can threaten the peace and tranquillity of the region and the nation at large,” the statement added.

When contacted to comment on what the governors said, Alhaji Jimoh Dojumo, who is the Special Adviser on Security to the Chairman of the South-West Governors’ Forum, Governor Rotimi Akeredolu of Ondo State said the position of the Northern governors was a welcome development since they were also trying to find a solution to insecurity in the country.

He, however, appealed to the governors to caution the herdsmen to stop destroying other people’s means of livelihood.

According to him, most of the farmers got loans from the banks to finance their farming activities.

He said the herdsmen were free to graze and do business anywhere in the country but it must be under the law.

“The governors should stand bold and tell their brothers the truth.

“They should tell their brothers not to graze to destroy other people’s farms; they should stop kidnapping and raping our women in the bush because it would not work.

“Can anyone go to the bush in Kano and be doing that?

“Here, they kidnap the women in the presence of their husbands.

“Some herders don’t just graze but go to the farm, uproot cassava for their animals to eat…Can you imagine this callousness!”

One of our correspondents reports that 37  herdsmen and over 5, 000 cows illegally occupying the Ondo State forest reserves have been chased out by the state’s security network agency, Amotekun, for violating the order of the state government of vacating the forest reserves in the state.

This followed the recent order handed down by Governor Akeredolu that all herdsmen illegally occupying the state forest reserves should leave or register with the state government in other to make their operation legitimate.

The Ondo State Commander of Amotekun, Chief Adetunji Adeleye, who disclosed the eviction, said his men were still in the forest to flush out the remaining erring herders.

Adeleye said some of the herdsmen who could not cope with the terms and conditions of the state government had met with the corps and opted to move out of the state peacefully.

He disclosed that the suspects were fished out from Ala, Oda and Ofosu forests.

“Some of them opted to leave the state because they couldn’t meet with our terms and conditions.

“They came through the Chairman of Miyetti Allah in the state. Some opted to go to Osun, Edo and Kogi States.

“So, our men escorted them to the boundaries of those states.

“We have to monitor their movements out of the state so that they would not destroy farms on their way out.

“Other came through the chairman and special adviser to the governor on Hausa matters,” he said.

The social media giant, Facebook, has deleted the account of the Indigenous People of Biafra (IPOB)’s leader, Nnamdi Kanu, after releasing a video where he accused Fulani herdsmen of destroying farmlands.

Kanu published a video showing some men, allegedly members of Eastern Security Network – a militia group in Nigeria’s South-East – engaged in the massive killing of cows in herdsmen’s settlements.

Facebook told the BBC that the company wanted to “give people the chance to speak up” while it also wanted people to “come to the terms that they are safeguarded” whilst on the platform.

In a statement, Facebook said deleting Nnamdi Kanu’s page was in line with the regulations of posting feeds that are defamatory.

A member of the Eastern Security Network group, who wouldn’t want his name mentioned, said the group would appeal against the ban, maintaining that the ban excludes Radio Biafra and its other social media accounts/platforms.

Kanu’s Facebook page had always been the platform for IPOB members worldwide. Nigeria’s government had proscribed the group in 2017.

Kanu, who jumped bail while facing trial over treasonable felony, is consistent in his call for the dismemberment of Nigeria.

Governor Nasir El-Rufai of Kaduna State had on Thursday expressed concern over a video clip circulating on social media which showed the massacre and destruction of properties of Fulani herders in the South, saying it came amidst avoidable rhetoric, frenzied ethnic profiling and unlawful eviction of citizens from their places of domicile.

He called out his colleagues especially those in the South to disavow the ongoing attacks and massacre of Fulani herders in their states.

El-Rufai said criminal actions of insurgents and bandits must not be allowed to tear Nigeria apart.

“We should not be seduced into the dangerous passion of blaming innocents, declaring them guilty of the crimes of others, evicting them, killing and destroying their property.”

The governor who bared his though in an online video clip said: “In difficult times, we must uphold the right of everyone to live, with security and safety.

“The frenzy of ethnic labelling makes solutions difficult and can only guarantee disorder, violence and pain.

“In Kaduna State, we are learning from decades of unfortunate and needless experiences.

“We have faced the tragic manifestations of the indigene-settler divide.

“This has been compounded by criminal activities that often have fatal consequences,” he said.

BREAKING: Eden Hazard picks another injury and will be out for 4-6 weeks

Why do we Africans look down on those who can’t speak proper English or have foreign...