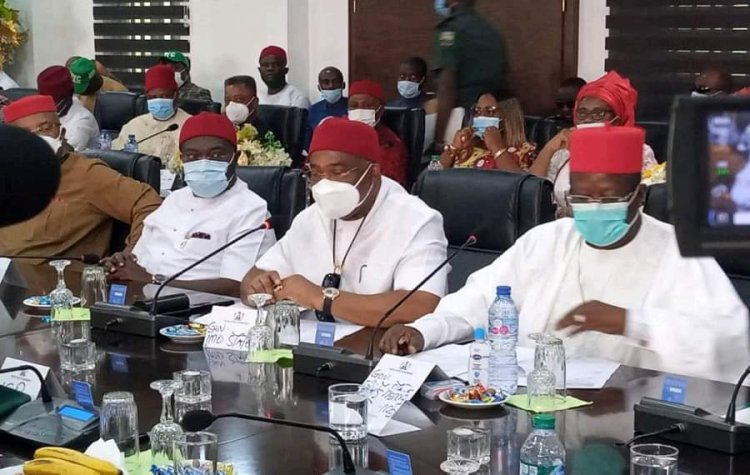 Southeast Governors on Wednesday condemned the alleged beheading of two policemen by gunmen in the region.

The Governors stated this in a statement after a virtual meeting chaired by Ebonyi Governor Dave Umahi.

A video of the gruesome murder of the two policemen had gone viral on social media with the Federal government blaming IPOB/ESN for carrying out the attack.

The Governors of the region however noted that they are working with security agencies to verify if the video is authentic.

They said: “We condemn in strong terms the video clip and write-up we saw in some social and print media where two policemen were said to have been killed and their heads cut-off by youths who styled themselves as members of IPOB/ESN.

“We have resolved among ourselves to work with security agencies to determine the authenticity of this video/report and if found to be true, to apprehend the perpetrators by all possible means to face the law.

“We are aware of similar videos in the past and which when subjected to forensic review was found out to have happened outside Nigeria”.

The Governors assured Nigerians especially the Police community that they will not rest until they have done justice to the matter.

They also resolved to tackle the influx and consumption of hard drugs in the region especially methamphetamine popularly known as mpkurummiri.

We resolved to be very committed in our fight against hard drugs in our region especially the new one called Methamphetamine, locally known in South East as Mkpurumiri.

“We have decided that all shops and locations where any hard drug is sold will be forfeited to the State Government and all those promoting the trade or indulging in hard drug shall be seriously isolated to face the law.

“Rehabilitation of those misled into hard drug is also ongoing. We urge community leaders to give secret phone calls through the special numbers offered by our Governors on security and hard drug,” they said.

The Southeast Governors also warned criminal elements in the region to surrender their arms and get immediately rehabilitation and empowerment to lead better and peaceful lives.

“We thank all our youths for the relative peace we enjoy in South East now. We are committed to your welfare. We want those who were misled to carry arms against our people and security agencies to surrender their arms to the Governors and get rehabilitated back to the society.

“We warn all criminals who have styled themselves as IPOB/ESN to kill our people to immediately stop. We are aware that the insecurity and killings in South East have gone beyond IPOB/ESN as any criminal finds it easy to hide under such a name to commit crimes. We are determined to do everything to protect the lives and properties of our people.

“Our youths are advised to leverage on the various empowerment and agricultural programmes by our Governors to better their lives,” they said.

On agitation by the youths, the Governors said they were reviewing the work of Ohaneze Ndigbo committees on the matter and will soon call a larger stakeholders’ meeting to address such.

“We thank all our security agencies for their commitment in securing the lives and properties of our people in South East and we assure them of our continued support as they discharge their duties,” they added.