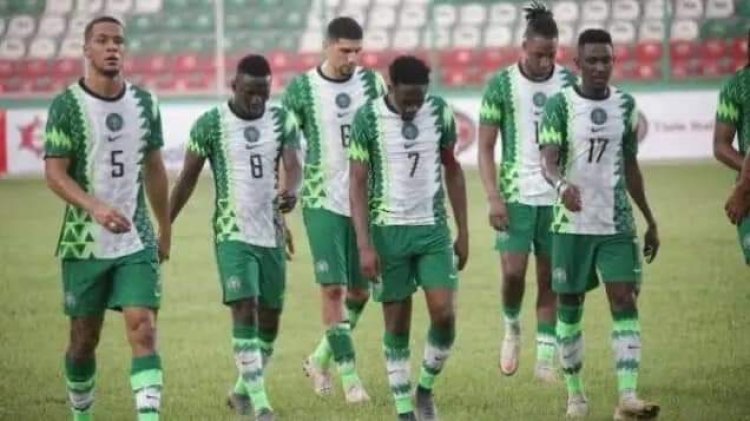 There was pandemonium on Tuesday at the Moshood Abiola National Stadium in Abuja after the Super Eagles failed to qualify for the 2022 FIFA World Cup.

Nigeria was beaten to a place in Qatar 2022 FIFA World Cup by Ghana after playing a 1-1. The Black Star of Ghana qualified on an away goal advantage.

After the game, Nigeria fans, who were angry the Super Eagles did not qualify, invaded the pitch, trying to attack Ghana players and destroying any objects in sight.

A video of the riot showed smoke of tear-gas billowing in an attempt to disperse the crowd.

Ghana had held Nigeria to a goalless draw on Friday in the first leg of the playoff at the Ohene Djan Sports Stadium in Kumasi.

Nigeria hosted arch-rivals Ghana in the return leg on Tuesday at the Moshood Abiola National Stadium in Abuja amid high hopes that the Super Eagles would scale through.

Nigeria coach Augustine Eguavoen made five changes to the team that played in Kumasi last Friday while his Ghana counterpart Otto Addo stuck to an unchanged XI.

Ghana opened the score line in the 10th minute of the game after Francis Uzoho made a huge error, allowing Thomas Partey to fire a powerful shot from outside the penalty box into the back of the net.

The Super Eagles’ Captain, William Troost-Ekong, responded nine minutes later by scoring from a penalty kick after Ademola Lookman was brought down by Dennis Odoi.

Four minutes after the half-hour mark, Osimhen had the ball in the back of the net after connecting to a through-ball from Leon Balogun but it was ruled out for offside by the VAR.

Samuel Eto’o: “I am happy because my son Messi stayed at...

Can You Guess The Only ‘N’-Lettered Country Ronaldo Hasn’t...