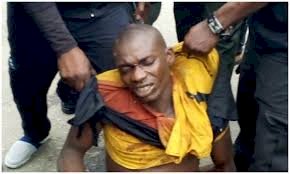 The police authorities in Rivers have arrested a suspected kidnapper said to be the most wanted in the state, Honest Digbara, popularly known as Bobisky.

This was confirmed on Saturday by the Commissioner of Police, Joseph Mukan, at the state police headquarters in Port Harcourt.

The police boss said the arrest of the criminal followed credible information by members of the public.

To Mukan, Bobisky and his gang members were responsible for the kidnapping and killing of one Barrister Emelogu after collecting ransom.

He also blamed the group for the killing of a Divisional Police Officer in Afam Division, Moses Egbede, killing of a civil defence at Glo pipeline, the kidnap and killing of Chief Mbu of Ogu/Bolo after collecting N7million as ransom among others.

Although the suspect was arrested alive, a Channels Television correspondent observed that several gunshots could not penetrate his body.

Also, several attempts made by Bobisky to disappear was resisted by the police. The suspect, however, died from matchet cuts.

Sequel to his arrest, Governor Nyesom Wike had earlier placed a N30 million bounty on Bobisky’s head, saying he will reward any member of the public who can provide useful information that will lead to the arrest of the criminal.