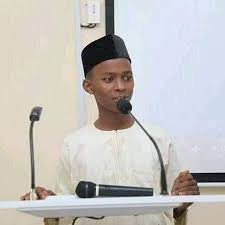 A17-year-old SS2 student in Gombe state, is a passionate upcoming writer who exudes passion and hard-work.

By all accounts, Garko is surely a Wole Soyinka’s doppelganger who has started from the nadir and is determined to reach the zenith of his passion of becoming a literary icon to be reckoned with.

Influenced by the likes of Sada Malumfashi, Hadiza Ismi El-Rufai, Richard Inya, Ibrahim Solo and Muhammad Nurain, Gargo launched himself into the pen profession last year when he was in JSS3 and he started out with poetry.

“The inspiration to write poetry came to me like the eclipse of the moon.

That time, I never read a book to the end.

I remember vividly the time when I wanted to start writing poetry; I spent a month writing a 20-line poem about my school.

“I thought the best way to be a great writer was to write what I know without having driven inspiration from any book.

Much later, I realized that I had to read more than I write.

That was when I became mad at reading.

“I used to read one to two books before the sunset, and I didn’t start with reading books we were being taught in school, I read Shakespeare a lot.

Then I later found Chimamanda Adichie.

I read all of her books. I scorned writing just to heed to reading books. “I bought a pocket dictionary.

Sometimes I had to stay in class to read while others were outside enjoying themselves.

It came to a time when I would give the dictionary to my friends and asked them to ask me any word from the dictionary. They called me all sort of names, but I didn’t dump reading.

Then I turned to poetry writing. Sometimes I would write 10 poems per day, read them to the air and keep them secretly.

“When I was about to enter SS1, I started writing stories and presenting them in different programs.

That was when I met people and I was advised to publish a book.

I had to hurriedly write a poetry collection of 100 pages then a novel of 120 pages. “When I released they would not be published because I didn’t have the resources. It’s tough to continue reading and writing in such our environment where literature is unborn.

I then deleted them and continue the journey to becoming a better writer,” the naive Garko narrated.

However, Garko had faced or is still facing some challenges.

Unlike many other writers whose challenges border mostly on funding, Garko’s was his environment.

He needed moral support to excel and there was nobody to offer same.

However, as time went on, he found solace in himself and soldiered on.

“The scenario of our environment is so bad literally.

Writing wasn’t known to our people, so I found it tough to be supported, although Alhamdulillah things are becoming better,” he uttered with an air of complacency.

“Last year, I received certificates in numerous organizations for my contributions toward embracing writing despite our people’s ignorance on literature.

It was last year that I won a poetry context beating many bigger poets on a WhatsApp group. “I got to meet many writers that are renowned in literary activities.

They’ve been helping me find my voice. Last year I wrote 200 poems till today I’ve them with the date,” Garko said.

Here comes Garko’s success story that has factored into the ingredients of defining his future as a writer.“Within this year I wrote a lot of stories and poems which have solace in many magazines, some can equally be found online.

“Currently, out of thousands of entries, my poem has made it to the 84 poetry collection that was published in a book called: ’84 wines for Wole Soyinka’.

I felt very delighted because I am the youngest on the list. “This year also, I was finalisted for this year’s international cultural exchange (WSICE), I was invited and I had a lot of fun in the home of Nigerian’s only Nobel laureate Wole Soyinka.

We shook hand and exchanged pleasantries.