Mbaka: Why I Introduced Foreign Contractors To Buhari’s Govt 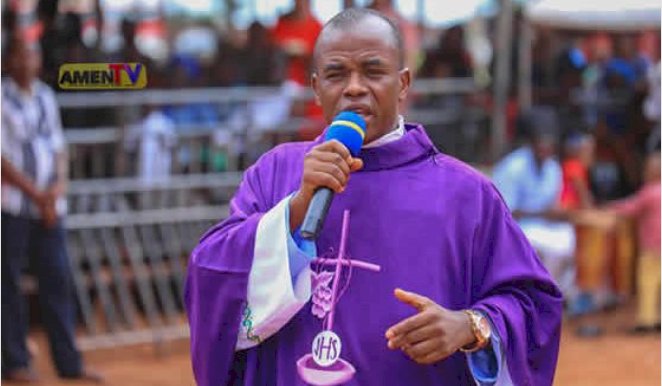 The Spiritual Director of the Adoration Ministry (AMEN), Ejike Mbaka, has opened up on the contractors he took to the presidency.

After Mbaka came down hard on the government of President Muhammadu Buhari last week, Malam Garba Shehu, Senior Special Assistant to The President on Media and Publicity, accused the priest of being angry with the president because he did not get the contracts he asked for.

In his sermon on Sunday, Mbaka admitted taking contractors to the presidency but said he did so as a means to seek lasting solution to insecurity.

He said he had no relationship with the contractors whom he described as “white people”, adding that he learnt that their request to work for the government was declined.

“When they talked about giving Father Mbaka contracts, I don’t want to talk about that, I was laughing. It is a laughable, childish accusation.”

“Whoever is saying that is a shame to himself and shame to the people he is representing. Father Mbaka’s voice came from the spiritual, so what I am saying is unchallengeable. Why I have been silent, I was waiting for them to change, until God said, ‘speak’. There are some messages that are like dew, some like rain, but some of them are like thunder. Anybody who is challenging that message is challenging the God of thunder and should be careful.

“The Father Mbaka who was speaking is not just a priest but, by the special grace of God, is a job provider. To the glory of God, those that are benefitting from me, direct salary earners, are not less than 23,000 people.

“The person challenging Father Mbaka, how many people are you feeding? If I talk, you talk? Because the government is paying you — do you know how many people I am paying? Before you challenge me when I talk about unemployment, I am an employer. So, somebody talking about giving Father Mbaka contracts, I started laughing. The three men he talked about, I am not here to defend anybody’s stupid allegation but God used that man to tell the world that Buhari’s government is not giving me money. You see how God works? Shehu, may God bless you for telling everybody that you are not giving me contracts.

“And these are the three men that we brought that will handle insecurity for the country; they had the gadgets. The white people, they had the facilities. That was during the first administration. And they said they will help them in conquering insecurity. They had the platform to end insecurity in this country under one month; under Abba Kyari. I just handed them over to the government people. They denied them of these; I don’t even know these people. They just came to Enugu and said, can I help them reach the government, that the level of insecurity in this country and how Nigeria has been shipping their oil out, refining and bringing them back, that we are losing. That they have all it takes to revive the oil apparatus in the country and get the whole youths employed and the issue of insecurity will die. These are the three people that they rejected their offer.

And even the people they are talking about that went there, I didn’t even discuss one percent of ‘if you get this contract’; contract of securing the country? What am I going to gain from it? As if to say when he pushes that, Fr Mbaka is no longer a Nigerian. And all the people they have been giving contracts, are they better than me?