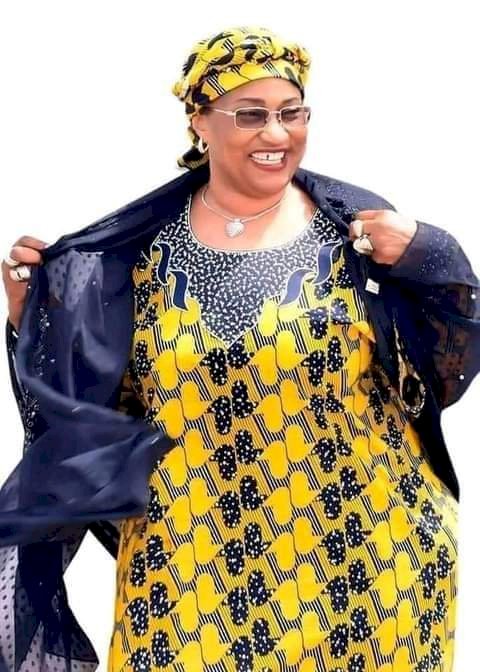 Sen. Aisha Jummai Alhassan is gone... Gone forever! The first thing I uttered when the shocking news was broken to me on Friday evening was ''Innalillahi wa inna ilaihi rajiun, kulli nafsin za'ikatul maut". From Allah we are and to him we should return, and indeed every soul must taste death.

I watched helplessly at the outpouring of grief-laden tributes from mourners across all walks of life detailing their utter disbelieve, bared sorrows, and fond memories of the woman who until her sudden death, was a powerful force of unity, an excellent grassroot mobilizer and a strong reminder of the roles women can play if empowered to participate in governance.

But for some of us close to her it's beyond sorrows, disbelieve or fond memories. It's more about the foundation of Muri now orphaned by her sudden death. No doubt Sen. Aisha Jummai Alhassan until her very last moment was the most unifying force for the people of Muri irrespective of tribe, religion or political affliations.

Her sudden and excruciating exit shattered the hearts of her family, friends, close associates, Muri Emirate, Taraba state – and the country at large. I personally felt lost and devastated. I wonder what become of the hitherto fragile foundation of Muri which she was able to support with her hospitable approach to leadership and an all-inclusive style of politics? Who can fill in the huge vacuum that her sudden death unearthed?

Sen. Aisha Jummai Alhassan didn't just wake up one day and claim the revered title of "Mama Taraba", she worked for it, and she deserved it even more. She was inarguably the only woman to have assumed the tittle of "Mama" for a whole state in Nigeria's political history. Where else do we hear people fondly calling someone as Mama Kano? Or Mama Gombe? Or Mama Lagos? Or even Mama Enugu? None, certainly none! But Sen. Aisha Jummai Alhassan was.

Our paths first crossed when she was contesting for Taraba North Senatorial district under the platform of the People Democratic Party, PDP and I was contesting for Jalingo/Yorro/Zing House of Representatives under the platform of the Congress for Progressives Change, CPC. We related well throughout the electioneering campaigns despite our political differences and that also played a key role in our success at the polls. At the National Assembly we work cordially in the best interest of our constituents. Whatever she did in her life politically or otherwise, she always sought for my advice.

Sen. Aisha Jummai Alhassan was a generous sister who perfectly combined the role of a caring mother to  many of us. I remember how she stood firmly fo me when my second tenure in the National Assembly was facing serious resistance from some quarters. For my sake one of the most respected women in Nigeria had to kneel down to beg the perceived forces against me to respect the will of the majority by allowing me take the second tenure ticket for Jalingo, Yorro, Zing Federal Constituency. This demonstrated clearly the extent a mother can go to have the best for her children.

Initially, Mama insisted that I should take the APC Taraba North Senatorial ticket but I pleaded with her that my brother Ahmed Yusuf is also interested and I won't contest for the ticket with him. A decision she found too unpalatable but had to go my way for the love she had for me. Priceless!

Many of our politicians hopelessly fought her out for selfish gains unfortunately they could not do 10% of what she did to sustain us and the politicians as well as the Party. So sad that we lost a caring mother, supportive sister, awesome niece and everything the Muri and Taraba state at large will always be proud of.

As a concerned Muri daughter and indeed someone interested in the progress and development of Taraba state as a whole, Mama always call to find out the level of development regarding the Bill for an Act to establish Federal University of Agriculture, Jalingo, and always sought to offer help where I felt I needed it.

In all, Sen. Aisha Jummai Alhassan's journey to the beyond makes me cry. I am still crying, but then I find solace in the words of Gail Caldwell when he asserted that "I know now that we never get over great losses; we absorb them, and they carve us into different, often kinder, creatures." Mama Taraba, this is my solemn promise; your journey to the great beyond, though painful, has touched me in such a way that I'm now a different and kinder person.

Adieu Mama! We are grateful to Allah (S.W.T) for the life you lived well. You were a dependable source of encouragement to many, you were my number one trusted confidant, and you were never jealous of any person's progress unlike most of our politicians. You will be greatly missed! Allah chenido yafo Adda, Hokkumo Aljannah firdausi, Aameen.