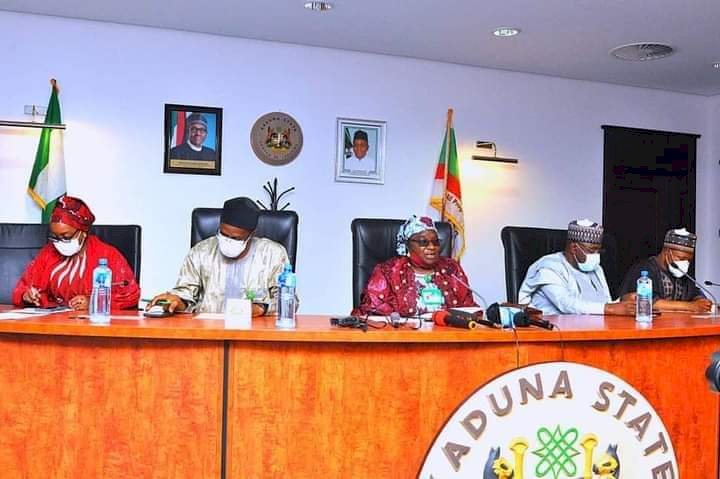 The Kaduna State government has started screening youths in its preparation to commence community policing to tackle the insecurity in the state.
According to Vanguard, Kaduna State Deputy Governor, Dr Hadiza Balarabe, chaired a meeting which is part of the consultations in the three senatorial districts on how to address insecurity on Monday.
The meeting had Senators, House of Representatives, House of Assembly members and chairmen from the 15 Local Government Areas in Kaduna North and Central as well as district heads in attendance.
Speaking with journalists after the meeting, the Senator representing Kaduna Central, Uba Sani, said they came together to look into the security problem facing Kaduna, stressing it that it needs to be tackled collectively.
Sani said he was working on a bill to restructure police architecture to meet contemporary challenges, adding that if it scales through, the bill will create state police
He said, “We want to solve insecurity in the state and Nigeria as a whole. We will involve the community in tackling insecurity in the state through traditional and political leaders. Our governor is determined to end insecurity in the state.’’
Also, a member representing Kajuru/Chikun federal constituency, Yakubu Barde, said insecurity affects everyone in the society, irrespective of political affiliations, ethnicity or religious beliefs.
“Commissioners for Local Government, Ja’afaru Sani and his Internal Security and Home Affairs counterpart, Samuel Aruwan, have briefed us during the meeting. You know state governors have no control over security. We are working on restructuring the policing architecture to enhance our ability to solve insecurity,’’ he said.

PSG-Basaksehir match interrupted:Demba Ba once again says "no to racism"