PSG-Basaksehir match interrupted:Demba Ba once again says "no to racism" 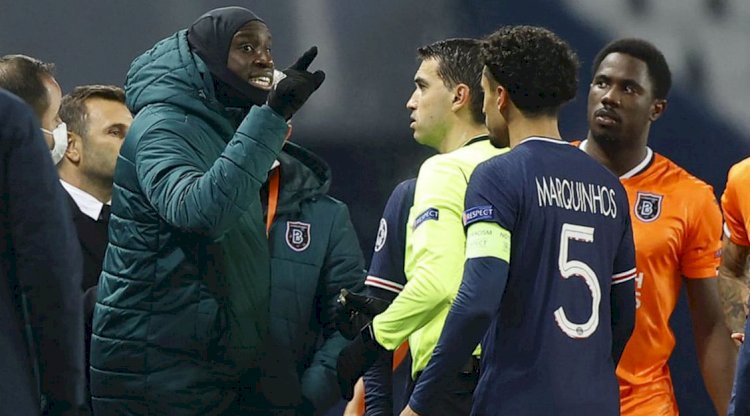 The Senegalese international is known for his anti-racism stance.  The Basaksehir striker led the players' revolt against the words of the 4th referee during the Champions League match against PSG on Tuesday, December 8 at the Parc des Princes.

Behind closed doors, in the cold Parisian winter, players began to congregate on the sidelines, called in by Basaksehir's substitute striker Demba Ba.  Coming off the bench, with his warm down jacket and balaclava on his head, the Senegalese international, native of the Paris region, was very upset.

When the delegate referee Sebastian Coltescu was heard designating assistant coach Pierre Achille Webo as "the black" in Romanian ("negru"), he triggered the anger of the players and the management of the Turkish club and then of PSG who  , together, left the lawn after a few minutes of tense discussions.  Unheard of at the highest level in a world of football often accused of laxity and indifference towards racism in particular.

"You never say 'that White', you say 'that one', so when you talk about a black man, why do you say 'that black'?  Ex-Chelsea player Demba Ba lost his temper in English.  Kylian Mbappé comes to say that he will not return to the game if Sebastian Coltescu stays on the pitch.  After ten minutes of tense discussions, the players return to the locker room.  Two hours later, UEFA formalized the postponement.

During this hectic evening at the Park, Demba Ba made an impression in a different way.  If in 2014, he had eliminated PSG with a goal from the shin in the quarter-finals, this time it was as a substitute that the native of Sèvres, a stone's throw from the Parc des Princes, left his mark.  this meeting which will remain in the history of the C1.  The hero of the night didn't have crampons on his feet, but anger deep in his heart.

Angry with the Italian league

The player has always reacted to racist acts in his sport.  When a few months ago Romelu Lukaku had been the victim of monkey cries on the side of Cagliari, Demba Ba had written on his Twitter account: “This is the reason why I decided not to play in Italy when I played.  had the possibility.  At this point, I hope all black players will leave this championship.  It certainly won't stop their stupidity and hatred, but at least they won't affect other races.  "

A few months later, it was the fate of the Uyghurs, persecuted in China, that angered Demba Ba.  “When are we going to see the rest of the world standing up for Muslims?  I know that there are footballers who want to fight for justice, whether they are Muslims, Buddhists, Christians or any other creed.  As athletes, we have a power that we don't even know.  If we get together and talk, things change.  If we stand up, people stand up with us, ”he told BBC Sport.

Victim of racism in China

Demba Ba cannot turn a deaf ear.  Above all, he could not bear this new affront to Pierre Webo, ex-striker of the Cameroon team, now his coach.  At 35, Demba Ba has been through various clubs since 2006. In his career as a globetrotter (Belgium, Germany, England, Turkey, China), he has been confronted several times with this kind of situation.  In 2018, while playing for Shanghai Shenhua in China, he was the victim of racist abuse by one of his opponents at Changchun Yatai, who was eventually suspended for six matches by the Chinese Federation.

"Welcome to the West, where the White believes himself so superior that racism and debility become commonplace," had tackled Demba Ba while two doctors mentioned the possibility of carrying out studies on the coronavirus on patients in Africa, on the plateau of  LCI last spring.

Zidane's future up in the air