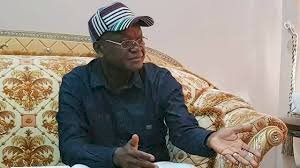 Governor Samuel Ortom of Benue State has expressed surprise at the arrest and reported killing of the state’s most wanted criminal, Terwase Akwaza aka Gana by the military Tuesday night.

Recall that Gana, alongside other criminals, surrendered and were to be received by members of the State Security Council when they were intercepted, arrested and later killed the kingpin.

Governor Ortom who briefed newsmen on the situation at the New Banquet Hall, Markurdi, yesterday said that he was shocked by the turn of event, adding that he is yet to be officially briefed by the military.

Ortom said that he had contacted the force commander of Four Special Forces, Major General Gadzama Ali and he has promised to visit him later to brief him.

According to Ortom, “Shortly after we left yesterday night, there was a press statement issued by the Special Force, that is Operation Ayema Kpatema in Doma, Nasarawa State.

“I reached out to the Commander of the Force and told him that I was surprised and needed an explanation. He assured me that he will explain to me but I must say that I am surprised at what happened. I do not want to join issues with the military but I have a duty to protect the lives of the people.