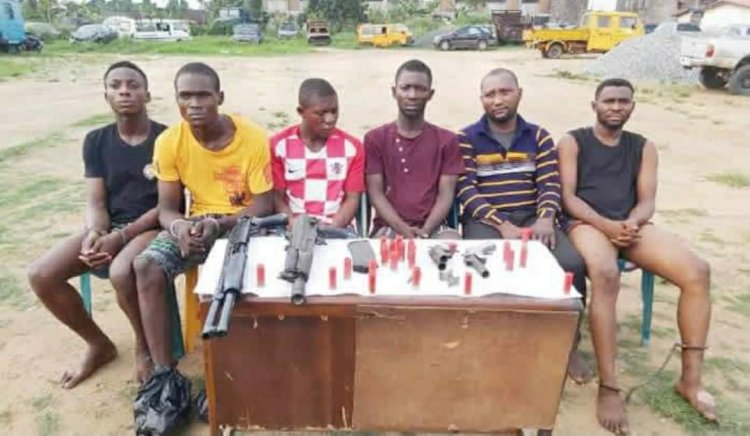 Seven members of a gang that allegedly specialises in robbery and kidnapping in Abia State are cooling off their heels in the custody of the Inspector-General of Police Intelligence Response Team.

City Round learnt that detectives went after them following the murder of two point of sale operators, Ezinne Iroh and Dr Victor Chimaobi, in the town. The gang reportedly killed Iroh on January 31, 2021 after robbing her of N150,000 while Chimaobi was murdered on January 21.

The assailants who operated in tricycles were also said to have killed one of their kidnap victims, Achinulo Ignatius, after collecting N2.5m ransom from his relatives. The 59-year-old man was reportedly abducted on November 1, 2020, at the Osisioma junction, along Enugu-Port Harcourt Expressway.

In the wake of growing apprehension among PoS operators in the state, our correspondent gathered that the IRT operatives led by DCP Abba Kyari were deployed to track down the gang, leading to Rafael’s arrest. He was said to have led the detectives to apprehend six other members of the gang.

Rafael, 32, from Kogi State, stated that his gang was formed during the #EndSARS protest to cash in on the relaxed police patrols at the time.

The father of two said he was formerly with a robbery gang led by one Handerson, who is a member of Vikings Confraternity, to which he also belongs.

He said, “I was arrested in connection with armed robbery and murder. Henderson always had money on him and whenever I was broke, I went to him for support. On one occasion, he asked me to join his gang and

“When the #EndSARS protest started, I returned to Aba and teamed up with Henderson’s other men to form a new gang. We robbed a PoS operator at a bank close Umugasi area in Aba and collected N52,000 from him. We also went away with the PoS machine. We were three that went for that operation and we used a tricycle and locally-made guns. I got N20,000 as my share.”

Rafael, a secondary school leaver, said their second operation was on Market Road by Kents in Aba, where Chimaobi was reportedly killed, adding that he shot the victim because he pushed one of his gang members, Chibuike.

He said, “The man died on the spot. I got N7,000 as my share in that operation because we were five that went for it. When I heard that the man was dead, I went to a drop the money at a T-junction and prayed for forgiveness. I vowed not to rob again but few weeks later, my gang members and I went to visit a friend along Ukgwu Street in Ogbor Hill.

“One of us called Santiago suggested that we should rob a PoS woman who was on the street. I objected because I am well known in that area. Santiago and Chibuike went for the operation. They robbed the woman and shot her. They collected N150,000 and I got N23,000.

“When we got home, we heard news that the woman was dead. We fought with Santiago for killing the woman and he told us that the woman struggled with him. I used the money to travel to Abuja where I spent two weeks. I was arrested when I returned to Aba.”

Chibuike, 22, claimed that he joined the gang because he lost his job after the #EndSARS protest, stating that he made N55,000 from five robbery operations he participated in.

He added, “I used part of the money I made to help my mother pay her house rent. It was Rafael who introduced me to the gang.”

Samuel, a polytechnic student, said he joined the gang to raise money for his clearance in school. The 25-year-old native of Abia State also confessed to have been initiated into Vikings Confraternity and robbery by Handerson.

On the robbery operation during which Chimaobi was killed, Samuel refuted Rafael’s claim that the PoS operator struggled with a gang member.

Kalu, 23, said, “I am a generator repairer but I went to robbery operations with the gang. One was at St. Michael area of Aba, where we looted a warehouse containing clothes. After we sold them, I got N17, 000. Then we went for another operation. It was a PoS vendor and I got N8, 000 as my share. Nobody was killed in all the operations I took part in.”

Abba Kyari: No Cover-Up For Anyone Involved — NDLEA