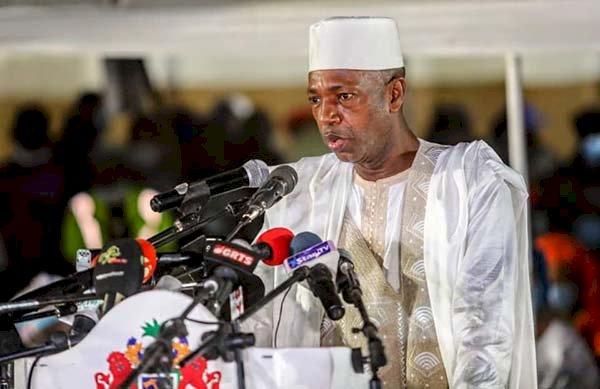 The leader of the National Reconciliation Party has finally broken his long silence, saying President Adama Barrow’s time is not ending now.

Hamat Bah has not made public speeches for months prompting rumours that he has fallen out with the Gambian leader. Unconfirmed reports said he was recorded casting doubt about President Barrow’s chances in the next election. Hamat never commented on that but his supporters said it was not true.

Speaking at State House where the president hosted people from YBK, Hamat said: “I can tell Gambians today that with the help of God President Adama Barrow’s leadership is showing no sign of ending and whether one likes or not, he will continue to lead and I even told himself that”. Hamat urged Gambians to vote for Barrow because he represents all tribes in this country and the whole of Africa respects him. “There are people going around destroying him but during the campaign the truth will come out. We will not insult anybody but the truth will surely come out. The problem in this country is that everybody wants to work in government but we should be very careful with what we say and do because we will all die one day,” Mr Bah said.

He added that the Gambian leader has no intention to deny any politician from campaigning. “I urge all Gambians especially alkalolu to accommodate all political parties. When they come to your villages welcome them and those who want to support them can come out and support but those who don’t support should not insult them or disrupt their meeting because it is their right to campaign. That is the right Adama Barrow fought for so he would not attempt to obstruct that freedom,” Minister Bah said.

BREAKING: Major Datong Kidnapped From NDA Has Been Found Dead

Dr Jafar Umar Abdulkadir (DVM) Can Do It More If voted,We...