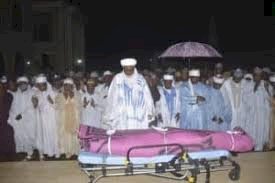 Miss Sadiya Magatakarda Wamakko died at the age of 23 years.