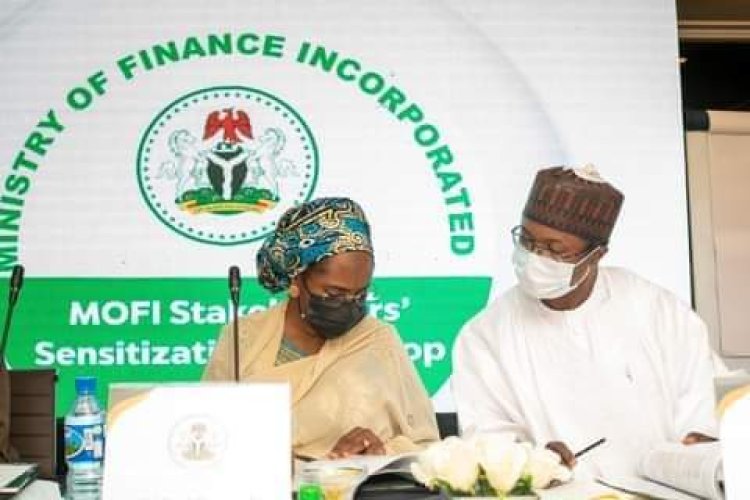 In a keynote address at the recently held ‘Ministry of Finance Incorporated (MOFI) Stakeholders Sensitization Workshop’ in Abuja, the Minister stated that “As part of the Reform, Restructure and Reposition (R3) component of the #SRGI, a number of government institutions were selected for reform” with #MOFI approved by President Muhammadu Buhari as one of them.

The Permanent Secretary Finance and Chairman of the Ministerial Committee on the restructuring of MOFI, Mr Aliyu Ahmed, explained that “since the establishment of MOFI under the MOFI Act of 1959, the MOFI Act has not been reviewed, updated or amended.” MOFI was established as a custodian entity for the Federal governments investments in various business enterprises across different sectors of the economy in Nigeria and abroad.

The MOFI Project Management Office Team Lead, Dr. Armstrong Ume Takang, presented the Findings and recommendations by the Restructuring Committee to all stakeholders at the event, while a special presentation titled “We know what we owe but not what we own” was delivered by renowned Nigerian economist and CEO of Economic Associates, Dr. Ayo Teriba right after. There was also a panel discussion titled ‘Stakeholder Expectations of a New MOFI’.

It is worthy of note that there are over sixty (60) companies left in the MOFI portfolio of FGN owned investments. Since the establishment of the Bureau for Public Enterprises (BPE) many of the original MOFI companies were privatized. The proposed restructure and repositioning will allow for MOFI to transform into a world-class company, create and collate a national asset register, ensure assets and investments are better managed, with a mission to maximize value for all stakeholders and the people of the Federal Republic of Nigeria.

The Minister in her closing remarks appreciated the enthusiasm and contributions to the discussions by the various attendees which included members of the restructuring committee, heads of agencies, private sector representatives and representations from other Ministries, Departments and Agencies such as the Bureau of Public Enterprises (BPE), Presidential Initiative on Continuous Audit (PICA) and Ministries of Justice amongst others.

Osinbajo: Why We Must Improve Governance, Institutional Capacity