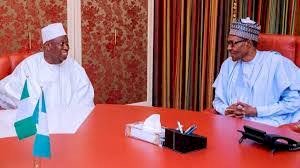 President Muhammadu Buhari has met with the Chairman of the APC Campaign Committee for the just concluded Edo governorship election, Governor Abdullahi Ganduje of Kano State.
POLITICS NIGERIA reports that the meeting which was held behind closed doors at the Presidential Villa, Abuja on Monday, also had in attendance the Caretaker Committee of the All Progressives Congress, Mai Mala Buni.
Ganduje and Buni, who is also the governor of Yobe State were seen departing the president’s office using a route to deliberately avoid State House Correspondents.
Ganduje and his Imo State counterpart, Hope Uzodinma, just arrived from Benin City as they went to oversee the victory of the APC in the poll.
This newspaper reports that the incumbent governor, Godwin Obaseki of the Peoples Democratic Party, PDP defeated Pastor Osagie Ize-Iyamu, his main challenger and the APC’s candidate to win a second term in office.

THE ORIGIN OF THE TURUDBE` FULANI PART 2