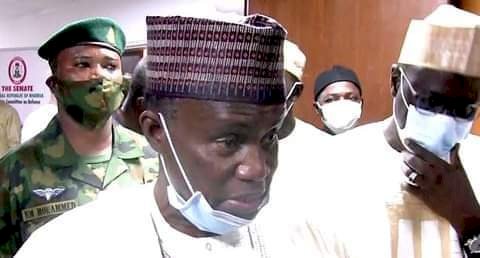 Bashir Magashi, minister of defence says, Nigeria is safer than it was seven years ago.

Amid increased incidents of killings, banditry and kidnapping across the country, there have been renewed calls for President Muhammadu Buhari to sack the service chiefs.

On November 28, over 40 farmers were killed by Boko Haram at Zabarmari in Borno state.

On December 1, the house of representatives summoned the president to brief the lawmakers on his efforts in tackling insecurity — the president, however, failed to honour the invitation which was scheduled for Thursday.

Speaking on a Channels TV programme on Thursday, the defence minister said the Buhari administration has subdued Boko Haram, and urged Nigerians to appreciate the government’s effort.

“The problem of this country is that we always forget too soon. Look in 2015 backwards, 2014, 2013; if you remember the situation in this country. In Kano, 200 people were massacred in the mosque. The Emir of Kano was also attacked. The road from Kano to Kaduna and Abuja were impassable. We had over 20 roadblocks from Kaduna to Abuja. It takes you almost 15 hours to reach where you are coming from. Even in Abuja, there were bombings. Everywhere in Nigeria in those years, you find that there were commotions, no security, people can’t even move,” he said.

“When this government came, you know what we did. In Borno state, about 20 local governments were under capture by Boko Haram. But as soon as Buhari came, they were all subdued and we took over all these things and we even said we technically defeated this Boko Haram.

“No piece of land is occupied by Boko Haram in Borno state. The only thing normally with the kind of insurgent operation is that they want to surprise you, embarrass you, and do whatever they think that would attract international news or the national news or cause commotion within the environment they operate.

“And that is what they have been doing, and that is why we are trying very hard to adopt tactics and other forms of operations in order to stop this kind of people embarrassing this country.

“We are putting in place everything you can think of, tactically and operationally, in order to return this country to the very peaceful country we know it.”

He added that the forces are stretched, and maintained that Nigeria is not receiving support from some countries it refers to as “friends” on provision of resources to address insecurity.

“At the moment, most people think because of the sporadic attacks here and there, we lost control or we are not doing our best. Most of you know the problem of this country. The armed forces are overstretched,” he said.

“The other thing that we may have gotten, we are not supported by some of these countries we call our friends. They are not ready to give us what we need — with the money we have and everything. But certainly, what I am trying to say is that Nigeria is better than what we were seven years ago.”

The minister also explained that the armed forces are capable of wiping out the insurgents if given the necessary equipment, adding that the Nigerian army is one of the best on the continent.

“In Africa, the Nigerian army should be adjudged one of the best. We have conducted so many operations outside Nigeria. We went to ECOMOG (Economic Community of West African States Monitoring Group); we did the very best we can. We went to Sierra Leone; we did the very best we can and some other places. We are a force that is reckoned with in Africa, but because of the nature of the prolongation of this war, people are getting tired,” Magashi said.

“People don’t even know the principles governing this kind of operation. These operations are not concentrated in one particular place. It is an operation that they hit and run. We don’t even know their bases. Now, we understand the tactics that the best way to fight these people is to get enough intelligence and go out there to fight them and this is what we are doing. Every day, we are getting information and the Nigerian army and air force are always in to see that they are run down.

“Since the beginning of this war, anybody who is watching it will know that Nigerian armed forces are capable of undertaking any operation, given the requisite equipment and the motivation they require to fight this war.”