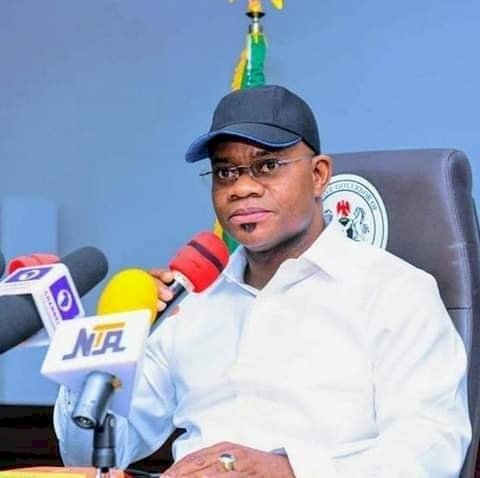 Kogi State Governor, Yahaya Bello, said the state government rejected N1.1 billion support fund from the World Bank because of his belief that COVID-19 is a “glorified malaria”.

The governor also described the World Bank’s Memorandum of Understanding for the fund as “a one-sided agreement”.

However, he admitted that the state government received N1 billion from the Federal Government to tackle the effects of COVID-19 in his state.

He said the while fielding questions on Channels Television’s Sunrise Daily programme on Tuesday which was monitored by The PUNCH.

PUNCH Healthwise had reported that the World Bank approved $114.28 million to help Nigeria boost its capacity for COVID-19 response.

The fund is expected to be distributed across the 36 states and the FCT, as grants to support efforts aimed at containing the spread of the virus in the country.

According to Bello, COVID-19 pandemic has a political undertone.

He said, “I rejected the World Bank fund because I do not believe in COVID-19. Even the five cases reported in Kogi State is an NCDC creation.

“I refused to sign because it is a one-sided agreement.”

Earlier, Bello expressed concern over the receipt of COVID-19 materials by state governments from COCAVID and other organisations.

He said it was “ridiculing” that “they bring three trucks and still want to do pre and post-audit.”

The governor said his government had been handing out palliatives to residents before COVID-19.

“I did say when COVID-19 came into this country that a few people are going to profiteer and that is what has happened. And I am saying it again that a few individuals are setting certain agenda for 2023. Now, from #EndSARS to hoodlums stealing CACOVID to various youths or people saying IPOB and statements. Various groups are making statements,” he added. (Punch)