Hosts, Cameroon have won the third-place match of the 2021 Africa Cup of Nations 4-3 on penalties after producing a stunning comeback from a... 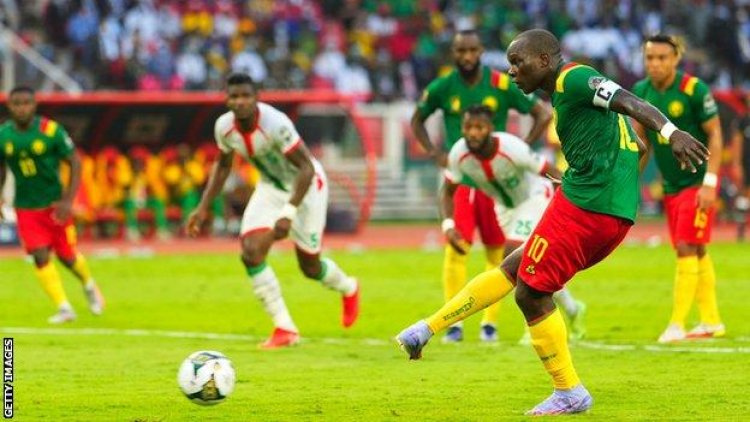 Hosts, Cameroon have won the third-place match of the 2021 Africa Cup of Nations 4-3 on penalties after producing a stunning comeback from a 3-0 deficit at the Stade Ahmadou Ahidjo, Yaoundé.

Steve Yago had opened the scoring in the 24th minute to stun the fans before goal keeper, Andre Omana was adjudged to have scored an own goal with fans booing the team while calling for the introduction of the captain, Vincent Aboubakar.

To assuage the angry fans, the Portugues manager, Toni Conceição, brought in Aboubakar and Karl Ekambi as they chased the game.

Matters had become worse for the team as Burkina Faso despite the change as Djibril Quattara made it 3-0.

Stephane Bahoken pulled one for the hosts and as the game was gradually coming to an end, Aboubakar scored his brace within the space of 5 minutes to drag the game into penalties which hosts won.

Meanwhile, Aboubakar has emerged the Golden Boot winner after scoring eight goals in the tournament.

His goals is the second-most at a single Africa Cup of Nations in the tournament’s history sharing the honour with Laurent Pokou who also scored 8 goals in the 1970 edition.

The record of the highest goal scorer in a single tournament is held by Ndaye Mulamba of Zaire, now DR COngo who scored 9 goals in the 1974 edition.